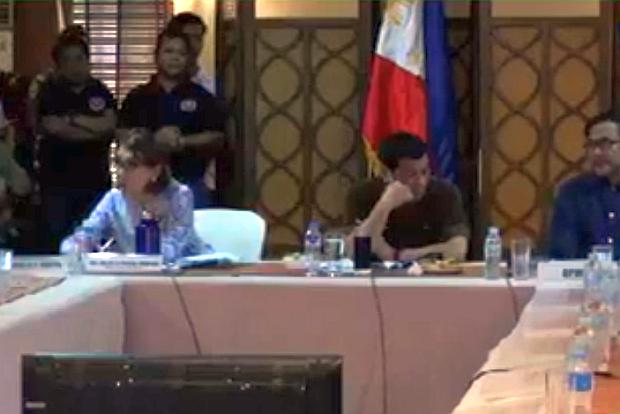 DAVAO CITY — President Rodrigo Duterte on Wednesday lashed out at the New People’s Army (NPA) for attacking government troops, in violation of the ceasefire declared unilaterally by his administration and the Communist Party of the Philippines (CPP).

During his meeting in Tubod, Lanao del Norte, with mayors of storm-devastated towns in the province, the President called the insurgents “egotists.”

“These communists are egotists. They speak as if they’re somebody. You see? Ceasefire … but they attacked the …” Mr. Duterte said.

Clashes erupted in Davao Oriental and Compostela Valley on Christmas Day as scores of NPA rebels harassed soldiers and tried to abduct a militiaman in separate incidents, according to the military.

The attacks prompted the Philippine National Police to remind its personnel across the country to brace for “more NPA atrocities.”

On Christmas morning, some 30 communist rebels reportedly tried to seize Arbilito Catampao, a militiaman and resident of Tubaon village in Tarragona, Davao Oriental, and assigned at the Tubaon Patrol Base of the Army’s 72nd
Infantry Battalion (IB).

Catampao was able to run and avoid capture, the military said.

Insurgents from the NPA’s Guerilla Front 34 then harassed the Melale Patrol Base, also under the 72nd IB, in Laak town, Compostela Valley, around 7:30 p.m. Government troops stopped the rebels some 250 meters from the base.

The rebels withdrew after engaging soldiers in a two-minute firefight, according to Maj. Gen. Noel Clement, commander of the Army’s 10th Infantry Division (ID).

There were no casualties among the militiamen and soldiers, said Capt. Jerry Lamosao, spokesperson for the 10th ID, but Clement believed that several rebels were wounded. —With reports from Nikko Dizon and Jeannette I. Andrade