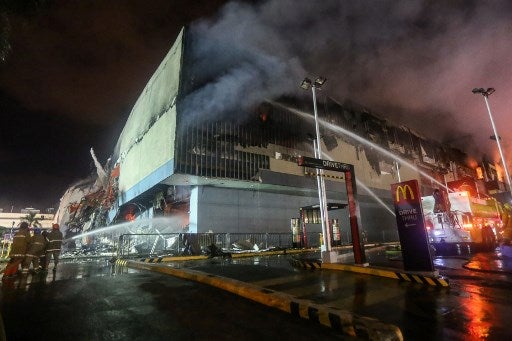 This photo taken on December 23, 2017 shows firefighters attempting to extinguish a fire at a shopping mall in Davao City on the southern Philippine island of Mindanao. Thirty-seven people were believed killed in a fire that engulfed a shopping mall in the southern Philippine city of Davao, local authorities said on December 24. / AFP PHOTO / MANMAN DEJETO

Below is the timeline of NCCC fire, partly based on account of Senior Supt. Wilberto Rico Neil Kwan Tiu, the BFP chief for Southern Mindanao:

10:05 a.m. – Bureau of Fire Protection Davao receives radio call from 911 about the fire

10:11 a.m. – Firetrucks from the Talomo Fire Station and 911 arrive at the scene; firefighters and rescuers tries to enter the burning mall. Firetrucks from nearby fire stations and from outside Davao arrive soon after. Area was cordoned off.

3 p.m. – At least six people are rushed to the Southern Philippine Medical Center (SPMC) for unspecified injuries after being rescued. One was confined in hospital.

5 p.m. – Fire continues to burn and spread to other parts of the mall. Kwan Tiu said they could not use wreckers to tear down portions of the building as the rush of air would worsen the fire.

5 p.m. – A temporary holding area at Alorica Restaurant is designated for distraught relatives waiting for news about their missing love ones even as firemen continued to douse the blaze

7 p.m. – Parts of the floors facing the parking lot side collapses due to severe fire damage.

3:00-3:20 a.m. President Duterte meets with some members of the rescue units who appraised him of the condition inside the burning mall.

3:20 a.m. – President Duterte announces the grim assessment the trapped victims may have zero chances of survival. Wailing and crying of grieving relatives follow, lasting for minutes.

4:30 a.m. – President Duterte leaves the holding area; families are soon ferried by government buses back to their homes. Firefighting continued

8 a.m. – Responders finds the half-charred body of a male person at a men’s room near the SSI office. Forensic teams later identified the remains as that of Jeffrey Sismar, listed as one of the 37 missing SSI workers.

1:30 p.m. – Mall management issues a statement expressing regret over the fire “that destroyed our mall and caused lives to be lost.”

6 a.m. to 9 a.m. – Fire suppression continues for pockets of burning flames as responders reached the SSI lobby leading to a stairwell. The bodies of the 36 remaining victims were found there.

4 p.m. – A Mass officiated by Davao archbishop and Catholic Bishops’ Conference of the Philippines (CBCP) president Romulo Valles in front of the burned shopping mall is attended by relatives of the victims and local officials.

Past 5 p.m. – Some of the bodies were brought to the SPMC for processing and identification