Deadly Christmas on the road: 30 killed 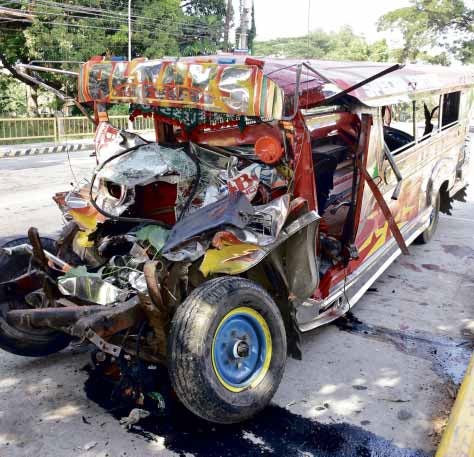 CRUMPLED This is what’s left of the jeepney that collided with a bus at Agoo town, La Union province, on Christmas Day. —WILLIE LOMIBAO

At least 30 people were killed and dozens injured in road accidents in the run-up to Christmas, putting a dampener to the Filipinos’ celebration of the happiest season of all.

In La Union province, 20 people, including seven children, were killed on Monday when a passenger bus collided head-on with the jeepney they were traveling in to Christmas Mass at Agoo town.

Another 10 passengers, along with the jeepney driver, and 17 occupants of the bus were injured.

Chief Insp. Roy Villanueva, Agoo police chief, said the jeepney was speeding and was overtaking another vehicle when it crashed into the Partas bus on the northbound lane of the Manila North Road at Barangay San Jose.

Nineteen of the 29 passengers of the jeepney were killed outright.

The 20th victim, Nelson Cabueñas, died while receiving treatment at a local hospital.

Six-month-old Kyle Cabagbag was the youngest fatality. The six other children who died in the crash were identified as Mark Jerson Cabero; Anna Karmina Ramiscal; Claudia Cabradilla and Nadine Joy, Norin Ivy and Neil Ivan, all surnamed Cabueñas.

Nine other passengers of the jeepney were in stable condition at the hospital: Ronald and Wenalyn Cabueñas; Ian Antolin; Chita and Johnny Cabradilla and minors Ednalyn Ramirez, Herson Cabiro and Jessa Mae and Jocelyn Cabradilla.

Villanueva said the jeepney passengers were an extended family from Barangay Pilar in Bauang town and bound for the Minor Basilica of Our Lady of the Rosary of Manaoag in Manaoag town, which houses an icon of the Virgin Mary that the faithful say performs miracles, when the accident happened.

The Land Transportation Franchising and Regulatory Board (LTFRB) said on Monday that it would open an inquiry into the crash on Jan. 3.

LTFRB Board Member Aileen Lizada said the management of Partas had agreed to extend financial assistance of P15,000 to the families of those who died in the crash.

In North Cotabato, eight people traveling home to Arakan town were killed when the jeepney they were riding in fell off a cliff in President Roxas town on Christmas Eve.

Chief Insp. Andres Sumugat Jr., President Roxas police chief, said the victims had been shopping in Kidapawan City and were going home for Christmas dinner when the accident happened.

Wenfred Inutan, 32, a resident of Barangay Doruloman, Arakan, and driver of the jeepney, told police the vehicle’s brakes failed as he was negotiating a downhill portion of the highway at 4:20 p.m. on Sunday.

The jeepney flipped several times after smashing into the guardrail on the roadside then went over the edge and crashed into an African palm oil plantation below.

Sumagat said three of the passengers died at the crash site. He identified them as Michael D. Dalig, Ryan Marfore and Delfin Igian.

Five others died at the town hospital, he said.

In the Cordillera region, a woman was killed and 25 other people injured in road accidents on Saturday and Sunday, police said.

Siganay died before reaching Seares Hospital at Bangued town. The boy was treated for multiple injuries at the hospital, as was Tamayo.

At 6:45 p.m. on the same day, also at La Paz, a motorcycle collided with a tricycle, injuring six people, who were all taken to Abra Provincial Hospital at Bangued.

Also at Bangued, 24-year-old Richmod Wilbor lost control of his car and struck two teenagers before the vehicle crashed into three stalls on Rizal Street on Saturday. The two teenagers, Jenny Ann Andallo and Nelmar James Millare, were injured and taken to a hospital for treatment.

In Mountain Province on Saturday, a van carrying nine people from La Union lost its brakes while descending the Sagada-Bontoc Road and fell 40 meters into a ravine. All nine travelers were hurt.

In Baguio City, a wagon driven by Joey Ellis Nakihid, 23, struck four children who were crossing a street to go to Burnham Park on Saturday. The children were treated at a hospital in the city.

In Benguet province on Sunday, a truck carrying vegetables crashed into a concrete wall after it suffered a mechanical failure while negotiating a curve at Barangay Taloy Sur, Tuba town. Driver Randy Mejia, 30, and his unidentified passenger were hurt.

Manalo, according to police, was riding his motorcycle on the highway when he was sideswiped by a white van that came from behind.

The teenager fell from his bike and was run over by the van, killing him outright.

Police said the van’s driver fled after the accident.

In Iloilo province, Johnny Bantilig died and four other people seriously injured when his motorcycle collided with another motorcycle along the provincial road at Barangay Tingui-an, Balasan town.

Seriously injured were Expedito Dalesme, 17, who was driving the other motorcycle, and his three passengers, who were his cousins: Sensen Dalesme, 29; Lester John Dalesme, 5, and Cindy Dalesme, 9.

According to the police report, Bantilig was riding in the lane of Dalesme while both motorcyclists were negotiating a curve on the provincial road. —REPORTS FROM GABRIEL CARDINOZA, VINCE CABREZA, JOVIC YEE, DELFIN T. MALLARI, NESTOR P. BURGOS JR., EDWIN FERNANDEZ, AP AND AFP