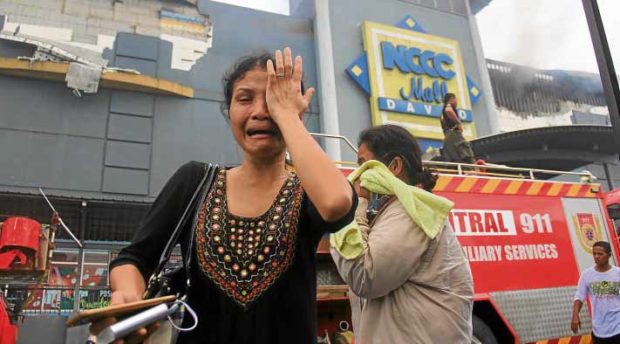 TRAGEDY Grief-stricken relatives of employees trapped in the fire that broke out at NCCC Mall in Davao City wait forword on their loved ones. —BARRY OHAYLAN

The NCCC Mall is operated by Lim Tian Siu trading company, whose owner is close to the Duterte family.

Aguirre announced the inquiry as firefighters entered what remained of the NCCC Mall to recover the bodies.

Davao City Mayor Sara Duterte later announced that 36 bodies had been found, which were being processed by the authorities for identification.

The recovery raised to 37 the confirmed death toll from the fire, with one other unidentified body recovered on Sunday.

The mayor said earlier that 38 people were missing and feared dead in the fire.

Aguirre directed the National Bureau of Investigation to investigate the fire and bring charges against the people who would be found responsible for the blaze.

“The loss of lives and the resulting damage caused [by the fire] underscore the need to determine if someone is at fault and should be held criminally liable,” Aguirre said in a statement.

“By punishing those responsible, we can set an example to others so that hopefully, there will be no repetition of these tragedies,” he said.

Aguirre also extended condolences to the families of the victims, who were employees of the Connecticut-based Survey Sampling International (SSI) Davao, a market research company with offices on the top floor of the shopping mall.

Pimentel also condoled with the families and urged the Bureau of Fire Protection (BFP) to investigate the fire thoroughly.

“I want to know why they (the victims) were trapped, and if there is anything we could have done to avoid this,” he said.

He said he was looking forward to receiving the BFP report “to update our fire safety regulations to prevent a tragedy like this from happening again.”

The blaze broke out at
NCCC Mall at 9:30 a.m. on Saturday morning, sending thick plumes of black smoke billowing into the sky over Davao City.

BFP and other officials reached by the Inquirer failed to answer why it had taken that long to put out the fire and why the city failed to mobilize its full capability to rescue the trapped call center staff.
A Davao resident whose car was left at the basement parking area of the shopping mall, said she returned to recover her vehicle around 4 p.m. on Saturday when she saw firetrucks whose crews were idle.

She said she asked the crew why they were doing nothing and was told that the fire trucks had run out of water.

The Inquirer asked Emmanuel Jaldon, the 911 chief, why heavy equipment were not deployed to tear down parts of the fourth floor and free the trapped call center staff.

Jaldon replied that he had no authority to make that decision.

The Davao City fire marshal, Senior Supt. Wilberto Rico Neil Kwan Tiu, described the shopping mall on Sunday as “an enclosed space with no ventilation,” though the authorities said they had yet to determine the cause of the blaze.

The building’s administrators on Sunday denied allegations from survivors that there were inadequate emergency fire exits and that some of them were locked.

“There is no truth to that allegation. In fact, as per accounts of those who got out, they were able to get out through the fire exit,” Thea Padua, the shopping mall’s public relations officer told Agence France-Presse (AFP) by text message.

Hipolito Sugcang, a resident of Barangay Ma-a, reported firefighters as complaining that they could not penetrate into the third and fourth floors of the building because of extreme heat.

Authorities earlier told AFP that firefighters needed to inspect the structural integrity of the burned-out building before venturing inside its gutted remains.

Mayor Duterte has asked residents to wait for the results of the official investigation.

“Negative comments are not helpful right now,” she said on Sunday.

She said she was not imposing a deadline on the investigation, as “these things should not be rushed.”

The city government has promised to extend financial assistance to the families of the SSI Davao staff who died in the fire.

Research Now SSI, the parent company of SSI Davao, confirmed the loss of its employees and pledged assistance to the families.

“This tragedy has left us with heavy hearts. We offer our condolences and prayers to the families and loved ones of the victims,” Gary S. Laben, chief executive officer of the American company, said in a statement on Sunday.

“Words cannot express how saddened we are. We are grateful for the courageous response of the first responders and others who rushed to the scene,” he said. —WITH REPORTS FROM ALLAN NAWAL, FRINSTON LIM AND AFP