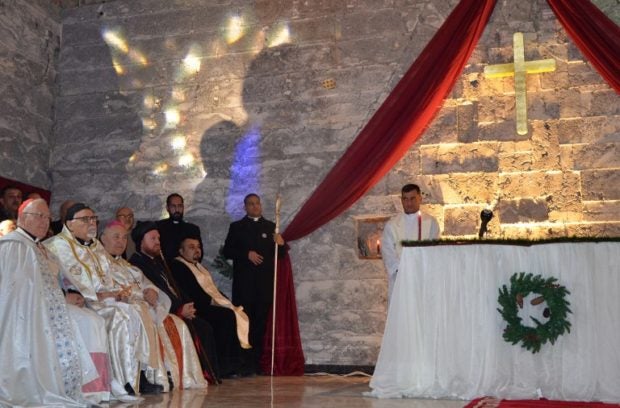 Iraqis clergymen attend a Christmas mass at the Saint Paul’s church on December 24, 2017 in the country’s second city Mosul. Hymns filled a church as worshippers celebrated Christmas for the first time in four years after the end of jihadist rule. AFP

Hymns and cries of joy filled a church in Iraq’s second city Mosul on Sunday as worshippers celebrated Christmas there for the first time in four years after the end of jihadist rule.

Mass opened with the Iraqi national anthem as women ululated, despite the modest decorations inside the church and the armored cars and police outside.

“This is a sign that life is returning to Mosul,” said wheelchair-bound Hossam Abud, 48, who returned earlier this month from exile in Iraqi Kurdistan.

Like tens of thousands of other Christians, Abud fled in 2014 as the Islamic State (IS) group seized the northern city and swathes of the surrounding Nineveh province, ordering the minority to convert, pay taxes, leave, or die.

Patriarch Louis Raphael Sako of Iraq’s Chaldean Catholic Church called on the congregation to pray for “peace and stability in Mosul, Iraq and the world”.

“With this mass, we’re sending a message of peace and love, because Christ is the messenger of peace,” he told AFP.

On Christmas Eve at Saint Paul’s church, Muslims stood with Christian worshippers and local officials amid candles and Christmas trees.

Outside, the portrait of a Christian killed under IS rule was displayed as a reminder of the city’s grim recent past.

Iraqi forces expelled the jihadist group from Mosul in July after months of ferocious fighting.

That was part of a string of defeats that have decimated an organization that once ruled over millions of people across large parts of Syria, and nearly a third of Iraq.

White sheets hung over the church’s window frames, blasted empty during the battle.

Farqad Malko, another of the few Christians to have returned, said the mass was a message to IS.

“With this celebration, we tell them that residents of Mosul are all brothers, whatever their religion or ethnicity, and despite all the damage and suffering,” he said.

Sunday’s church service in eastern Mosul was “an immense joy”, she said, smiling broadly as seasonal hymns played in the background.

Saint Paul’s is currently the only functioning church in Mosul, thanks to the clean-up efforts of young volunteers.

“We must rebuild the city’s churches that were destroyed to encourage the return of Christians,” Abud said.

The 2003 United States-led invasion of Iraq had by 2014 pushed some 90 percent of Mosul’s Christian population to flee, leaving only 2,000 families when it was captured by IS, officials and activists said.

Sako urged Christians displaced within Iraq and those who have sought refuge abroad to return and “play an active role in (the city’s) reconstruction”.

Between 70 and 80 Christian families have so far returned “and more are expected to follow soon”, according to Dourid Tobia, an advisor on Christian affairs to the provincial governor.

Mina Ramez, 20, returned with her family two months ago, in time for the start of the new university year.

“This is our land, these are our homes, and we will do everything we can with our brothers of all religions to rebuild it,” she said. “We will never abandon the land of our birth.” /kga