It’s the question every good little girl and boy asks on Christmas Eve: When is Santa coming?

As it has done every year since 1955, a Canadian and American defense agency is tracking the jolly old man’s path around the globe in his reindeer-powered sleigh.

A 3-D, interactive website at www.noradsanta.org shows Santa on his delivery route, allowing users to click and learn more about the various cities along the way.

The Santa tracker presented by the North American Aerospace Defense Command (NORAD) dates to 1955, when a Colorado newspaper advertisement printed a phone number to connect children with St Nick but mistakenly directed them to the hotline for the military nerve center.

To avoid disappointing the little ones, NORAD’s director of operations at the time, Colonel Harry Shoup, ordered his staff to check the radar to see where Santa might be and update the children on his location.

President Donald Trump joined in the NORAD tradition on Sunday, answering the phone from his Mar-a-Lago resort in Florida.

“What would you like more than anything?” the president asked one child. 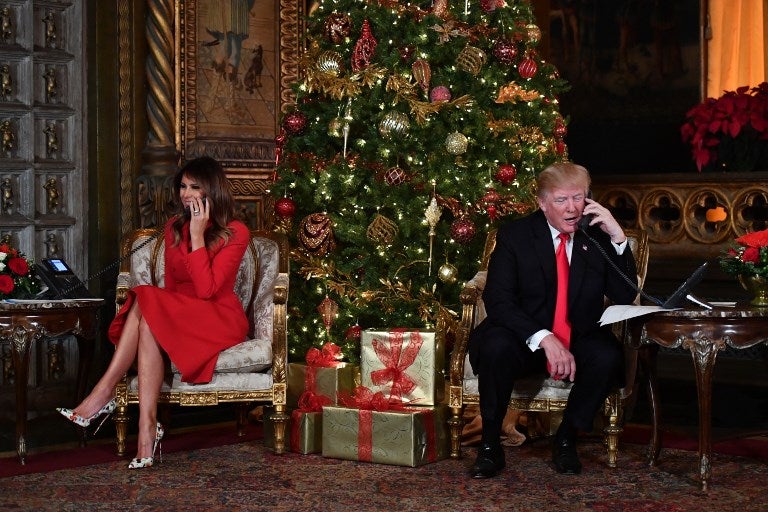 Another asked help for his hospitalized grandmother.

“So you want your grandma to get out of the hospital? That’s what your wish is? That’s great. That’s better than asking for some toy or something,” Trump said.

Liftoff from the North Pole

First lady Melania Trump also took calls: “How are you? Merry Christmas. Are you tracking Santa? Do you know where he is right now?” she asked.

“As soon as you go to sleep, Santa will be there.”

When not spreading holiday cheer, NORAD conducts aerospace and maritime control and warning operations — including monitoring for missile launches from North Korea, something that may have been on Santa’s mind as he passed over the country’s capital of Pyongyang.

“NORAD radars have sensed movement near the North Pole. It appears that the elves have finished loading Santa’s sleigh and Santa has lifted off! Even loaded with all the gifts and goodies, Santa’s sleigh seems to be moving lightning fast,” the website said in a video clip at the launch of Santa’s global journey.

As of 0130 GMT, Santa was headed for French Guiana in South America, having already left more than 4.4 billion gifts for sleeping children in his wake.

Volunteers manning the NORAD phone line included military members in uniform. One soldier completed his look with a camouflage Santa hat, according to photos on the website’s Twitter account.

The Santa tracker “has become a magical tradition for generations of families everywhere,” General Lori Robinson, commander of the US Northern Command and NORAD, told Politico.

“While certainly a reminder that we have the watch defending North America, our ultimate goal is to provide goodwill and cheer during the holiday season.”

Volunteers are armed with a 14-page handbook detailing the “tracking operation,” Politico reported.

“When a rocket or missile is launched, a tremendous amount of heat is produced — enough for the satellites to see them,” it says. “Rudolph’s nose gives off an infrared signature similar to a missile launch. The satellites detect Rudolph’s bright red nose with no problem.”