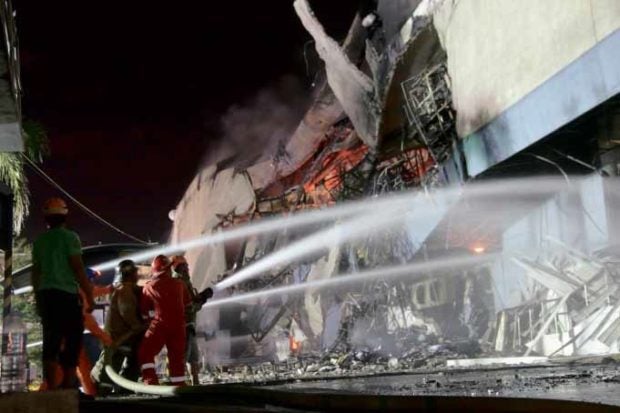 At least 37 people, including call center staff from an American firm, are believed to have perished in a fire that tore through New City Commercial Center, one of the biggest malls in Davao City, local authorities said Sunday.

President Rodrigo Duterte, himself a Davao native, visited distraught relatives outside the burning building overnight but told them there was “zero” chance their loved ones had survived.

On Christmas Eve, Senate President Aquilino “Koko” Pimentel III also conveyed his grief to Davao mall fire victims as he sought for a thorough investigation of the blaze.

“I cannot express with words the grief that I share with the families of those trapped inside NCCC (New City Commercial Center). I still hope for the best possible outcome. Our thoughts and prayers are with them at this terrible time”, Pimentel said in a statement.

The senator noted the courage that the firefighters showed as they responded to the fire incident, but sought a thorough investigation from the Bureau of Fire Protection (BFP).

“I want to know why they were trapped, and if there is anything we could have done to avoid this. I look forward to the report of BFP and see if we need to update our fire safety regulations to prevent a tragedy like this from happening again,” said Pimentel.

Firemen have concluded that all those trapped in the building are dead, she said, adding: “They assessed that no one would survive in that heat and with that thick, black smoke.”

The deadly fire adds fresh misery for the Philippines at Christmas as the death toll from a tropical storm that hit Mindanao Friday crossed 200 and with tens of thousands displaced by severe flooding and landslides.

The blaze started at the four-story NCCC Mall Saturday morning, sending thick plumes of black smoke billowing into the sky over Davao.

With low wages but strong English language skills, the Philippines is a popular destination for international companies to set up customer call centers.

Jimmy Quimsing, a retired seaman, was one of the relatives desperately waiting for news.

His 25-year-old son Jim Benedict worked at the call center and had not been in contact since the fire broke out.

Quimsing said he spoke to President Duterte and had been told to prepare for the worst.

“He told us … no one would survive under these circumstances,” he told Agence France Presse (AFP).

Paolo Duterte, the president’s son and the vice mayor of Davao, also wrote on Facebook that fire officials had told him there was “zero” chance of anyone trapped surviving the blaze.

In a statement on its local Facebook page, SSI said it would set up a “command center” for the relatives of those missing.

“Please continue to pray for everyone’s safety,” the firm added.

Davao fire marshal Honeyfritz Alagano said the blaze may have started by a spark on the third floor of the mall, which had a furniture section.

“One of our firemen here has a kid who is (a call center) agent in there. He told us some of them went to collect their stuff at their lockers and were trapped,” Alagano told AFP.

“The mall is an enclosed space with no ventilation. When our firemen tried to enter they were pushed back by smoke and fire.”

Mayor Duterte said she told the fire-fighters to retrieve all the dead, stressing: “you do not stop until you find 37.”

She also said the circumstances surrounding the fire would be investigated but added that it was too early to say who was at fault.

Deadly blazes occur regularly in the Philippines, particularly in slum areas where there are virtually no fire safety standards.

“It’s possible that while they were working, they did not immediately notice the fire spreading,” Davao police officer Ralph Canoy told AFP, referring to the call center workers.

Davao, with a population of about 1.5 million people, is the biggest city in the southern Philippines. It is about 1,000 kilometers (620 miles) south of Manila, the nation’s capital.

His daughter succeeded him when he ran for president, with one of his sons winning the vice mayoralty post.

Most of those killed by the recent tropical storm were also in the southern region of Mindanao.

There have also been horrific fires in bigger buildings and factories, where corruption and exploitation mean supposedly strict standards are often not enforced.

In 2015, a fire tore through a footwear factory in Manila, killing 72. Survivors of that blaze blamed barred windows and other sweatshop conditions for trapping people inside the factory.

In the deadliest fire in the Philippines in recent times, 162 people were killed in a huge blaze that gutted a Manila disco in 1996. With  reports from Agence France Presse