DPWH limits use of Allen-Calbayog route due to rock fall 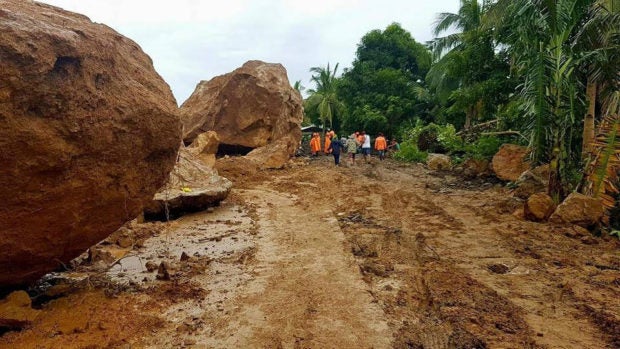 Rocks as big as a house fall on a portion of a highway in Barangay Malayog, Calbayog City, Samar. -Photo by Jennifer Allegado

CALBAYOG CITY, Samar – The Department of Public Works and Highways (DPWH) in the province limited the flow of vehicles along the Allen-Calbayog route due to a rock fall on one section in Barangay Malayog, this city.

District Engineer Alvin Ignacio said boulders as big as a house fell around 7 p.m. on Thursday.

Fortunately, he added the site was away from houses so no one was hurt.

While the area had been prone to a landslide, said Ignacio, the boulders this time were bigger and had occupied the four-lane street.

The DPWH Samar First District Engineering Office advised the motorists going to the north and south bound to take the Catarman-Calbayog through Lope de Vega Route.

“Some motorists still want to pass on the area despite our advisory to take the Lope de Vega route, so we just made a detour road for them to pass but controlled and scheduled,” Dd Ignacio said.

“If motorists were in a hurry and would prefer a convenient travel to Calbayog, we advise them to take Catarman-Calbayog via Lope de Vega.” Ignacio added.

In its advisory released on Friday afternoon, the DPWH Samar First District Engineering Office said the portion of the Daang Maharlika would be temporarily closed to traffic to all types of vehicles.

The clearing operations and the repair of the road were stopped in the evening to ensure the safety of the DPWH team.

“We hope that the motorists will follow on our call. We are doing our best to give them the convenient travel that they need to have, we want them to be safe, I hope they will understand us,” De Ignacio said. /je