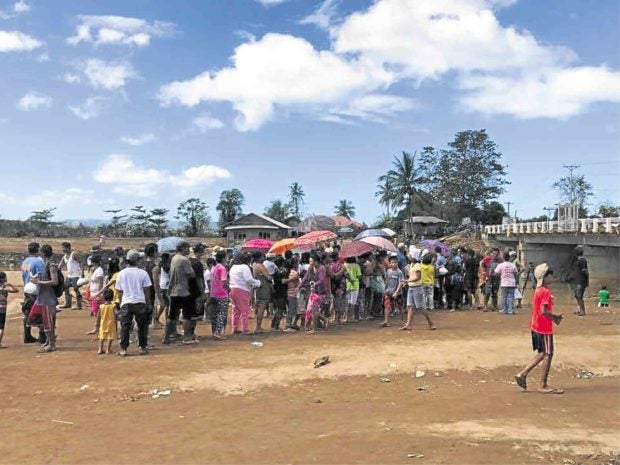 TACLOBAN CITY—Several interior villages of the storm-hit capital town of Naval, Biliran, remained cut off from aid after roads and bridges connecting them to the rest of the town and province had been destroyed at the height of Tropical Storm “Urduja” (international name: Kai-tak) on Dec. 16, a group of calamity survivors said.

“This means thousands of people from these villages could now be suffering from hunger,” said Pablito Kuizon, provincial chair of the group People’s Surge.

This could be the rationale for an order given by President Duterte for food depots to be put in place in areas highly vulnerable to storms and other natural calamities.

The President gave the order after an aerial survey of Biliran and other areas devastated by Urduja.

“Roads were closed because of the landslides and that’s the first problem that relief efforts encounter—how to transport the commodities right away,” said Agriculture Secretary Emmanuel Piñol, who was with Mr. Duterte during the aerial inspection.

“They have yet to be given help by our government,” he said. The villages, he said, were accessible only by foot as even four-wheel drive vehicles, normally designed for rough terrain, could not reach the areas because of landslides.

Kuizon also claimed that at least 5,117 families in Naval, who belonged to People’s Surge, were denied aid by the local government.

Quoting the municipal social development office, Kuizon said the families were not
given aid because they had
just recently received P5,000 in aid for survivors of Supertyphoon “Yolanda.”

The P5,000 in Yolanda aid was given to people who were not given financial assistance to build or repair their homes.

“I hope this policy changes,” Kuizon said. “The President told our officials to provide assistance to all typhoon victims,” he said.

Food packs being distributed to survivors of Urduja consisted of three kilograms of rice, two cans of sardines and two packs of instant noodles.

The Department of Agriculture estimated that at least P701 million of crops, half of them rice, had been destroyed by Urduja.

Piñol said the farmers could avail themselves of P5,000 in so-called survival and recovery loans and P20,000 in capital.