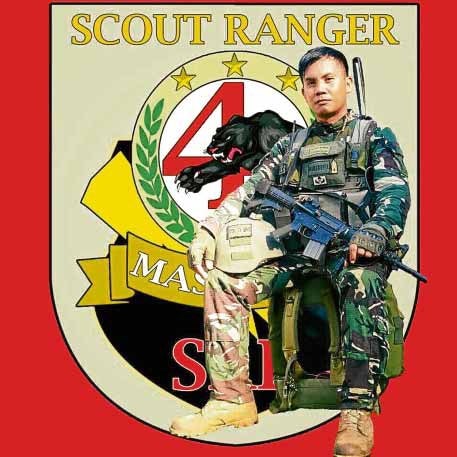 The Armed Forces of the Philippines conferred a posthumous Medal for Valor Award to Army Scout Ranger Capt. Rommel Sandoval on Wednesday at the 82nd founding anniversary of the AFP.

Twenty-seven other soldiers were given the Order of Lapu-Lapu for their role in military campaigns against the Islamic State-inspired Maute group and the New People’s Army (NPA).

In a statement, the AFP said Sandoval, commander of the 11th Scout Ranger Company, was recognized for having “distinguished himself in combat as he displayed extraordinary courage, bravery, sterling leadership and professionalism by offering the greatest sacrifice of giving his life to a fellow comrade, thereby keeping with the finest tradition of soldiery.”

Sandoval’s Medal for Valor, the highest award conferred to members of the AFP, was received by his wife, Maria Anna Rosario.

Sandoval was the highest-ranking official killed in the five-month-long battle to re-take Marawi City from the Maute group.

Sandoval and his buddy, Pfc. Sherwin Canapi, were killed in September while they tried to save one of their company’s team leaders who was wounded and trapped in one of the buildings in the city.

In his speech, AFP Chief of Staff Gen. Rey Leonardo Guerrero said there were three things that marked the service of the military to the people this year: “duty, commitment, and affirmation of our oath to protect the nation and the people.”

“In fulfillment of our duty, your AFP has faced bullets, braved storms and tremors and secured our borders and territorial waters all in the service of our country and people. This year alone, 263 heroes made the ultimate sacrifice and more than 2,000 of our troops were wounded in the frontlines,” Guerrero said.

“Our commitment is to the Filipino people who drive us to stand strong and united in defense of our freedom in the far future,” he said.