Remains among 20 corpses dug up in storm landslide site in capital town of Biliran
By: Joey A. Gabieta - Correspondent / @joeygabietaINQ
Philippine Daily Inquirer / 05:20 AM December 21, 2017 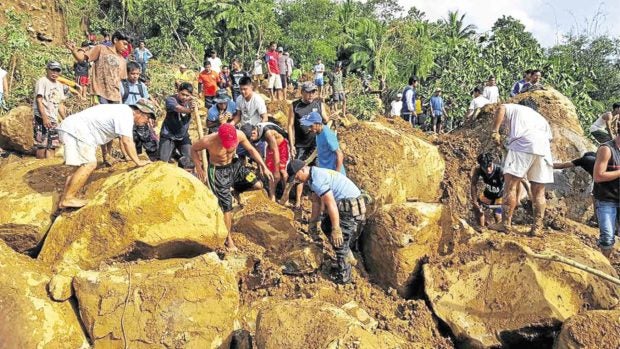 TACLOBAN CITY—Signs of normalcy were emerging in Naval, capital town of Biliran province and worst hit by Tropical Storm “Urduja” (international name: Kai-tak), as the retrieval of corpses of people who were entombed in a pile of boulders and mud there yielded that of a child without its head, indicating the severity of the disaster that befell the landslide-stricken community.

Zoy Muralla, Naval local government operations officer, said 20 bodies had been recovered in the Naval village of Lucsoon since the start of retrieval operations on Dec. 17, a day after Urduja struck.

Eight of the bodies were those of children. One headless corpse was found to be that of Jadine Novillo, 2, and youngest fatality in the landslide.

Teams composed of policemen, soldiers and civilian volunteers, continued to dig in the area where eight houses were buried in the landslide in search of nine missing residents.

Landslides also killed two people in the village of Larrazabal and one in Sto. Rosario.

Elsewhere in Biliran, the supply of power and water has returned and prices of basic commodities had stabilized.

“That is our target,” he said in a phone interview.

Urduja, he said, toppled at least 100 electric poles across the province.

Power had been restored to the towns of Naval, Biliran, Cabucgayan and Caibiran while supply has yet to return in the towns of Kawayan, Culaba and Almeria. 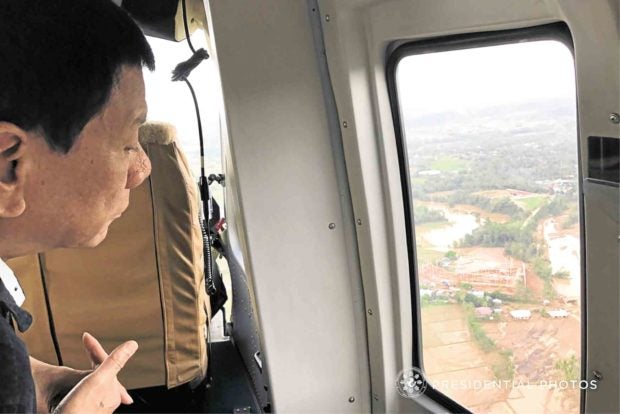 President Duterte looks at the destruction wrought by Tropical Storm “Urduja” aboard a helicopter. —MALACAÑANG PHOTO

Renilo Jamin, senior trade and development specialist of the provincial office of the Department of Trade and Industry (DTI), said prices of commodities in Biliran had stabilized.

After the storm, he said in a phone interview, DTI officials checked prices in markets and saw “no price movement.”

The DTI office, he said, also checked gasoline prices following a spike due to low supply in the wake of Urduja.

Gasoline prices in the province went up to as high as P80 per liter on Dec. 16 when power supply in the entire province was cut.

Gasoline prices have since returned to P37 to P38 per liter.