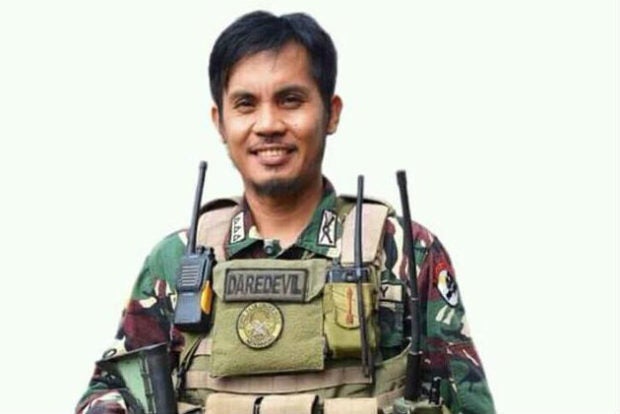 For offering “the greatest sacrifice of giving his life to a fellow comrade,” an Army Scout Ranger officer is set to be posthumously conferred the prestigious Medal of Valor – the nation’s highest military honor – during the anniversary ceremony of the Armed Forces of the Philippines (AFP) on Wednesday at Camp Aguinaldo in Quezon City.

The 38-year-old Cpt. Rommel Sandoval, of the 11th Scout Ranger Company, was the highest-ranking military officer killed in the five-month gun battle between government troops and Islamist fighters belonging to the Maute Group in Marawi City.

Sandoval is known to the troops for his call sign “Daredevil.”

“Cpt. Sandoval distinguished himself in combat as he displayed extraordinary courage, bravery, sterling leadership and professionalism by offering the greatest sacrifice of giving his life to a fellow comrade, thereby keeping with the finest tradition of the Filipino soldiery,” part of his citation read.

The junior officer and his friend, Private First Class Sherwin Canapi, died while trying to save one their comrades, who was wounded and trapped in one of the buildings within the battle area on September 10. Corporal Jayson Mante, the team leader they tried to save, was able to survive.

“I-cover fire niyo ako (Give me cover fire)!” was Sandoval’s command to his troops, as narrated by a post in Scout Ranger Books, a Facebook page dedicated to pay tribute to the elite Army unit.

The terrorists kept on shooting Mante even if he was already wounded and trapped. Sandoval then decided to rescue him and even checked his pulse. But the terrorists continued to aim at them as they waited outside.

Sandoval was shot on his side but he and Canapi were able to shoot back at the terrorists. The officer crawled on top of Mante to shield him from gunfire as the terrorists kept on firing at them. It was the gunshot on his cheek that turned out to be fatal.

Based on the detailed account of Mante posted on the same Facebook page, he was already hopeless that he would come out alive at that time he sustained a few gunshot wounds. He was already shot on his left arm and his side, making it hard for him to get up.

Sandoval, a member of the Philippine Military Academy Class of 2005, would also be acknowledged with the Order of Lapu-Lapu (Magalong) award, a recognition to officials and personnel of the government and private individuals “who have rendered extraordinary service or have made exceptional contributions to the success of an activity pursuant to a campaign or advocacy of the President.”

A total of 165 government security forces were killed during the Marawi City siege, the longest and bloodiest urban war in the country in recent years.

The Medal of Valor is the highest military honor that can be bestowed to military personnel for acts above and beyond call of duty. The award undergoes a thorough screening process in the AFP and the Department of National Defense (DND) until it reaches the Office of the President for approval.

So far, there have only been 40 awardees of the Medal of Valor. The last recipient before Sandoval was Private First Class Ian Paquit, who was killed during the Zamboanga City siege in 2013. Paquit covered fire for re-positioning troops.

Based on Republic Act No. 9049, a Medal of Valor awardee is entitled to a lifetime monthly gratuity of P20,000, which is separate from the salary or pension he is receiving from the government.

Dependents of the awardee are also entitled to free medical and dental services, and free consultation in hospitals anywhere in the country. Other benefits include: precedence in employment in government agencies; priority in approval of loans, housing; discount on transportation, entertainment and admission fees; scholarships.    /kga