Dengvaxia blamed for death of 2 kids 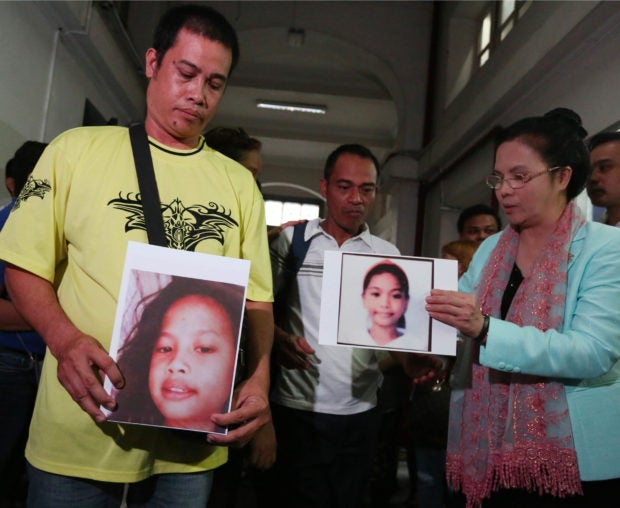 The Public Attorney’s Office (PAO) has come to the assistance of parents who claim their children died after being immunized with Dengvaxia even as the Department of Health’s office in Central Luzon has reported that no child in the region has died after receiving the vaccine against dengue.

Persida Rueda-Acosta, chief of the PAO, told reporters on Tuesday that the parents of Grade 4 student Christine Mae de Guzman of Mariveles, Bataan province, and of 10-year-old Anjielica Pestilos of Quezon City had come forward to attest that Dengvaxia, developed and manufactured by French pharmaceutical giant Sanofi Pasteur, could be deadly.

Her parents claimed that De Guzman, 10, died of severe dengue six months after being immunized with Dengvaxia in April last year.

According to her parents, Pestilos was inoculated in September and fell ill and died of lupus, a systemic autoimmune disease, earlier this month.

“Those claiming that Dengvaxia has not resulted in the death of the students who were injected with it are lying. It’s clear that somebody had already died,” Acosta said.

But Dr. Jesse Fantone, chief of the DOH epidemiology unit in Central Luzon, denied on Tuesday claims in news reports and on social media that some schoolchildren fell ill and died after being immunized with Dengvaxia.

The death of two students in Bataan and Pampanga provinces last year were due to pneumonia and heart disease, Fantone said.

Fantone described the deaths as “coincidental causes,” referring to ailments that occurred before or at the time of vaccination that led to serious complications or death.

“Finding out if the vaccine was the cause of death is a tedious process. An autopsy is needed, among other things,” he said.

It was unclear whether the Bataan student was De Guzman. Fantone declined to identify the two students, citing the DOH’s privacy rule.

The DOH halted a P3.5-billion dengue immunization program on Dec. 1 after Sanofi announced the results of a new analysis that showed Dengvaxia should not be recommended for people who have never had dengue.

Tests, Sanofi said, showed that Dengvaxia could worsen symptoms in vaccinated people who had not been exposed to the dengue virus before.

The DOH said more than 830,000 schoolchildren aged 9 and over had been immunized before the program was halted.

The risk to people who got the vaccine is extremely small, Sanofi said, but, according to a recent report by The New York Times, parents fear that Dengvaxia has turned their children into time bombs, in whom the dengue virus could set off a life-threatening illness.

The Times quoted Dr. Scott Halstead, who has been studying dengue since the 1960s, as saying the potential danger was not from the vaccine itself but from the immune response to it.

Acosta said De Guzman’s parents, Nelson and Marivic de Guzman, had submitted a joint statement narrating the circumstances of their daughter’s death, in a bid to get justice.

“This really pains me because I am also a mother,” Acosta said. “[Dengvaxia] has caused several deaths and we’re now in the process of helping the victims’ families.”

Ferdinand Topacio, a lawyer for the Volunteers Against Crime and Corruption, said the group was preparing plunder and other criminal charges against the people behind the Dengvaxia mess.

Topacio called on Justice Secretary Vitaliano Aguirre II to immediately order the National Bureau of Investigation to “cordon off” the DOH to secure documents on the immunization program.

“We have been informed by an insider that [some unscrupulous health officials] are already shredding the documents in the DOH. So I urge Secretary Aguirre to order the NBI to raid the DOH at once and seize the documents,” Topacio said.

Acosta said Aguirre had ordered her office to assist parents whose children died after being immunized with Dengvaxia.

“The state is ready to protect you and offer you assistance in filing administrative, criminal and civil cases,” she said, referring to potential complainants.

The DOH immunization program was carried out in Metro Manila, Central Luzon and Calabarzon (Cavite, Laguna, Batangas, Rizal and Quezon), the regions with the highest cases of dengue.