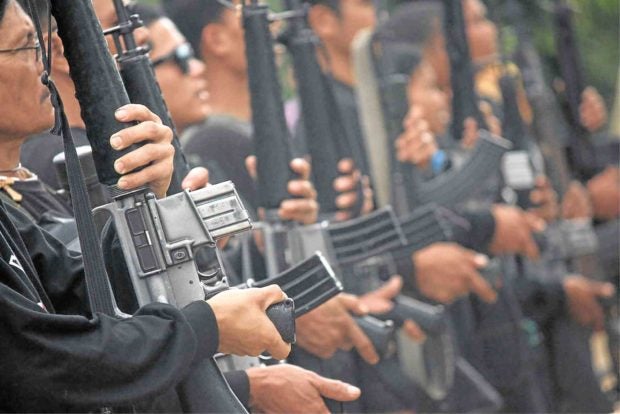 DAVAO CITY — At least 300 “lumad” (indigenous peoples, or IPs) soldiers would be sent to their communities in Southern Mindanao to guard their ancestral domain against communist insurgents, military officials said on Sunday.

The lumad recruits, organized into four Sundalo ng Mamamayan Armado Laban sa Terorismo at Kriminalidad (Soldiers of the People Armed Against Terrorism and Criminality, or SMART) companies, are set to be assigned near their home villages after graduating from an eight-week basic military training, according to Capt. Jerry Lamosao, public affairs chief of the Army’s 10th Infantry Division (ID).

“The potential of the IPs will be seen in a different perspective. They can maximize the skills and knowledge acquired during training in solving issues and problems in their communities,” Lamosao said.

“Those in the ancestral domains are very prone to agitation and recruitment because of their innocence about the real picture of the NPA’s intentions,” Clement said. “As such, there’s a need to educate and inform the IP communities about the propaganda, deception and motives of the communists in their ancestral domain.”

A recent study by the Davao City-based Army division revealed at least 80 percent of communist insurgent recruits in Southern Mindanao came from the tribes.

The study, which was based on the number of IP rebels who surrendered to authorities, revealed the extent of “NPA deception” in lumad communities, said Col. Erwin Bernard Neri, commander of the Army’s 1001st Infantry Brigade in Compostela Valley province.

The soldiers would be sent to their hometowns within the 10th ID’s area of operation in Davao and Caraga regions, as well as in some parts of Cotabato and Sarangani provinces.

Led by an IP officer, each company is expected to handle multirole operations, meaning it should be effective in civil-military operations as well as in battle, military officials said.

The NPA and several left-wing organizations have hit the military’s move to recruit an all-lumad unit, calling it “a blatant exploitation of lumad communities.”

The Supreme Tribal Council for Peace and Development, an anticommunist lumad group in Davao, hailed SMART’s creation and rewarded Clement with the title Datu Balunto (rainbow) “for bringing hopes of peace and security” in lumad communities.