UN to vote Monday on measure rejecting US Jerusalem decision 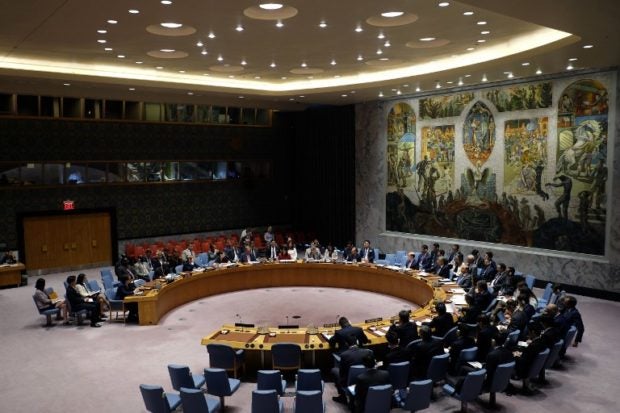 US Ambassador to the United Nations Nikki Haley (center, red dress) speaks during a Security Council meeting on North Korea at the UN headquarters in New York on July 5, 2017.
The UN Security Council will vote Monday, Dec. 18, 2017, on a draft resolution that seeks to reject US President Donald Trumps recognition of Jerusalem as Israel’s capital. AFP FILE

UNITED NATIONS, United States — The UN Security Council will vote Monday on a draft resolution that would reject US President Donald Trump’s decision to recognize Jerusalem as the capital of Israel, diplomats said.

Egypt requested the vote Sunday, a day after it presented the measure that is likely to be vetoed by the United States.

Breaking with international consensus, Trump this month announced that he would recognize Jerusalem as Israel’s capital and move the US embassy there from Tel Aviv, sparking protests and strong condemnation.

US Vice President Mike Pence will visit Jerusalem on Wednesday, wading into the crisis over one of the most controversial issues in the Israeli-Palestinian conflict.

Israel seized control of the eastern part of the city in the 1967 Middle East war and sees all of Jerusalem as its undivided capital. The Palestinians view the east as the capital of their future state.

The draft resolution obtained by AFP stresses that Jerusalem is an issue “to be resolved through negotiations” and expresses “deep regret at recent decisions concerning the status of Jerusalem,” without specifically mentioning Trump’s move.

“Any decisions and actions which purport to have altered the character, status or demographic composition of the Holy City of Jerusalem have no legal effect, are null and void and must be rescinded,” it said.

Diplomats said they expected the United States to use its veto power to block the measure but that most, if not all, of the 14 other members are expected to back the draft resolution.

Ukraine, a US ally at the council, however raised concerns about the decision to quickly move to a vote and requested additional time, a council diplomat said.

The council will hold a closed-door meeting Monday to discuss the draft resolution ahead of the vote, diplomats said.

No embassies in Jerusalem

The draft resolution calls on all countries to refrain from opening embassies in Jerusalem, reflecting concerns that other governments could follow the US lead.

It demands that all member-states not recognize any actions that are contrary to UN resolutions on the status of the city.

Turkish President Recep Tayyip Erdogan expressed hope that Turkey would soon be able to open an embassy to a Palestinian state in East Jerusalem, as he again denounced Trump’s recognition of the city as the Israeli capital.

Several UN resolutions call on Israel to withdraw from territory seized during the 1967 war and have reaffirmed the need to end the occupation of that land.

The Palestinians had sought a toughly-worded draft resolution that would have directly called on the US administration to scrap its decision, but the final version was softened to draw maximum support.

Backed by Muslim countries, the Palestinians are expected to turn to the UN General Assembly to adopt a resolution rejecting the US decision, if, as expected, the measure is vetoed by the United States at the council.

On Saturday, Israel’s UN Ambassador Danny Danon “strongly condemned” the draft, dismissing it as an attempt by the Palestinians “to reinvent history.”

“No vote or debate will change the clear reality that Jerusalem has and always will be the capital of Israel,” Danon said in a statement.

Aside from the United States, Britain, China, France and Russia can veto any resolution presented at the council, which requires nine votes for adoption. /cbb