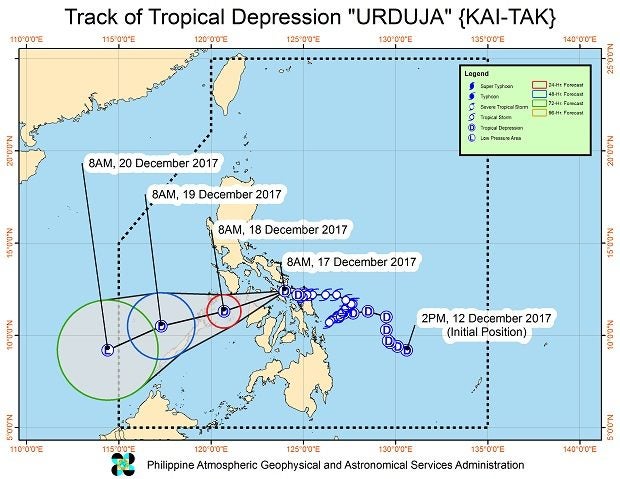 Tropical depression “Urduja” continued to weaken Sunday after crossing the Samar provinces but was still drenching parts of Luzon and the Visayas, the weather bureau said.

At 10 a.m., Urduja’s center was estimated in the vicinity of Mobo, Masbate, the Philippine Atmospheric, Geophysical and Astronomical Services Administration (Pagasa) said.

It was packing maximum winds of 55 kph near the center and gustiness of up to 90 kph. It was forecast to move west southwest at 15 kph.

“Residents of these areas must undertake appropriate measures against flooding and landslides and coordinate with their local disaster risk reduction and management offices,” Pagasa said.

Meanwhile, rain over the Bicol Region and the Visayas is forecast to gradually weaken.

Sea travel is not advised over the seaboards of areas under tropical cyclone warning signal (TCWS).

Meanwhile, at 7 a.m. Pagasa estimated the tropical depression outside the Philippine area of responsibility at 1,990 km East of Mindanao, with maximum sustained winds of 40 kph near the center and gustiness of up to 50 kph. /cbb