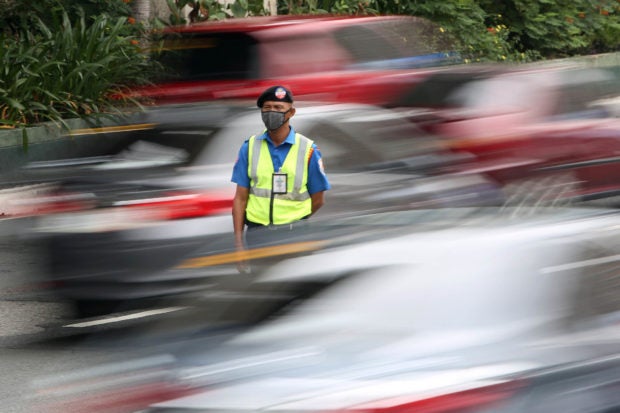 An MMDA officer guards the HOV (High-occupancy vehicle) lane, the fifth lane along EDSA Guadalupe during a dry run that started Dec.11. HOV lanes are set for vehicles with at least two passengers including the driver, as a way to ease traffic, the HOV lane would be the innermost lane on EDSA, just beside the Metro Rail Transit.
INQUIRER / MARIANNE BERMUDEZ

The Metropolitan Manila Development Authority (MMDA) has decided to lift its ban on driver-only vehicles on the fifth innermost lane of Edsa, dubbed as the “high-occupancy vehicle” (HOV) lane, following a week-long dry run of the new policy.

Since the vehicles are tinted, Pialago said that traffic enforcers would not be able to determine if the vehicle is driver-only or a carpool.

Aside from heavily tinted vehicles, the MMDA spokeswoman admitted that not all motorists have been informed of the HOV lane policy.

Pialago said the policy would be set aside temporarily until the MMDA would come up with another solution on how it would be implemented.

While traffic enforcers have not been ordered to catch the policy’s violators, Pialago said they would be dealt with later on once the hitches in the implementation of the policy have been fixed.

The MMDA announced the policy last Dec. 6 as a traffic reduction measure on Edsa following a meeting with the Metro Manila Council, composed of mayors of the cities and municipalities. /jpv