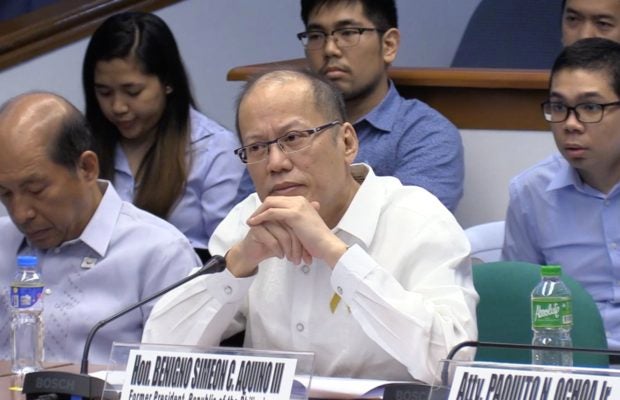 De Lima lauded Aquino for answering the issues “head-on” without getting any preferential treatment.

“PNoy faced the public to clarify and explain the decision of his past administration to implement the dengue vaccination program during a critical period in the nation’s public health. He confronted the accusations of negligence and corruption head-on, without equivocation, as only a person telling the truth can,” De Lima said in a statement.

“There is only one lesson in this. You cannot put a good man down. And the former president is as good as they come. We did not expect anything less from him. He made us proud,” she added.

Aquino on Thursday appeared before the joint hearing of the Senate blue ribbon, health and finance committees on the government’s anti-dengue immunization program, particularly the procurement of the P3.5-billion worth of the now-controversial Dengvaxia vaccines.

During the hearing, Senate blue ribbon committee chair Richard Gordon raised doubts on the quick approval of the vaccine’s procurement. He pointed out that after Aquino’s meeting with Sanofi Pasteur officials in Paris on December 1, 2015, the former president approved the purchase of the drug on December 22, and allocated the government’s unutilized funds for the project on December 29.

However, Aquino justified the use of government’s savings to procure the vaccines, saying he gave the green-light for the purchase of the vaccine using the unutilized funds for 2015 because they were set to expire at the end of that year.

De Lima commended Aquino’s appearance before the Senate, saying his “sober and straightforward” answers to questions of Gordon and Sen. JV Ejercito, chair of the committee on health, “left the two senators groping for ways to pin him down.”

“Even as a private citizen, PNoy continues to uphold standards of transparency and accountability in public service,” she said.

“PNoy was entitled to two courtesies in the Senate hearing. First, as a former President and, second, as a former member of the Senate. Instead, PNoy appeared in the hearing without expecting any special treatment, and rightly so, as he was treated like any other resource person by Senators Gordon and Ejercito,” De Lima said.

Gordon’s supposed VIP treatment of the Duterte family “says a lot about the fairness of hearings” he conducts, De Lima pointed out.

“Grandstanding, ego self-gratification, and microphone-hogging can be excused, but not contrived set-ups, innuendos, and dramatizations that indicate partiality, or worse, pre-judgment,” she noted. /jpv