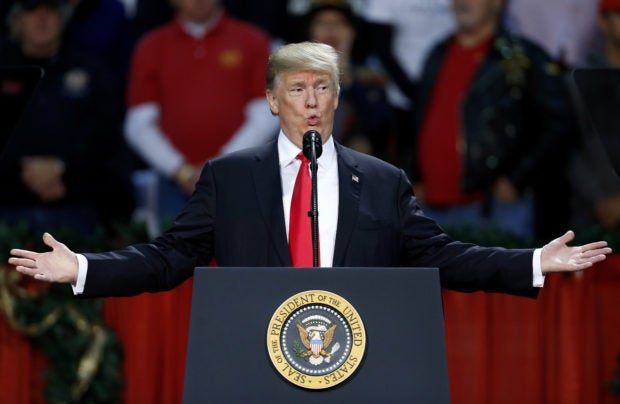 WASHINGTON — President Donald Trump frequently casts his first year in office as a string of successes and campaign promises fulfilled. But less than a quarter of Americans think Trump has made good on the pledges he made to voters while running for president, according to a new poll by the Associated Press-NORC Center for Public Affairs Research.

Among Republicans, just half say Trump has kept his promises, which included vows to overhaul his predecessor’s health care law, withdraw the United States from a nuclear accord with Iran and invest millions in new projects to fix the nation’s aging infrastructure. None of those steps have been taken.

“Everything has stalled out,” said Mark Krowski, 37, an independent from Milwaukee, Wisconsin, who leans Republican but didn’t vote for Trump last year.

As 2017 comes to a close, the majority of Americans painted a broadly pessimistic view of Trump’s presidency, the nation’s politics and the overall direction of the country. Just three in 10 Americans said the United States is heading in the right direction, and 52 percent said the country is worse off since Trump became president — worrisome signs both for the White House and Republicans heading into a midterm election year where control of Congress will be at stake.

In a second AP-NORC poll conducted this month, Trump’s job approval rating sits at just 32 percent, making him the least popular first-year president on record. A quarter of Republicans say they’re among those who disapprove of the president.

One relative bright spot for Trump? The improving economy.

With a soaring stock market and unemployment hovering around 4 percent, 40 percent of Americans approved of Trump’s handling of the economy. That’s higher than the three in 10 Americans that approved of the president’s handling of health care, foreign policy or taxes.

Still, Trump continues to talk about his presidency with lofty rhetorical flourishes, declaring that his first months in office outshine those of his predecessors. But there’s no doubt that 2017 has been devoid of any significant legislative accomplishments, though Republicans are urgently trying to pass a sweeping overhaul of the nation’s tax system. The package would give generous tax cuts to corporations and the wealthiest Americans, and more modest tax cuts to low- and middle-income families.

“We’re very, very close to a historic legislative victory, the likes of which rarely has this country seen,” Trump said during a meeting with lawmakers earlier this week.

Republicans are banking on the tax overhaul being enough to carry them through next year’s House and Senate contests, elections that will largely be a referendum on Trump’s first two years in office and the GOP’s stewardship as the majority party on Capitol Hill. But with the legislation rushed through Congress and negotiated largely in private, Trump and lawmakers may have more work to do to sell the public on its benefits.

“There’s so much back and forth and so many adjustments being made. It’s just so uncertain,” Edward Hale, a 72-year-old independent, said of the tax legislation.

One thing Hale, a retired federal government employee from Clarion, Pennsylvania, is certain of in the proposal? “It definitely favors Mr. Trump and his wealthy friends,” he said.

The survey results suggest that with or without a tax overhaul, Trump has work to do in convincing the public that his presidency is benefiting them. Just 25 percent of Americans think the country is better off since Trump took office — and only 20 percent say they personally are doing better.

By contrast, an AP-NORC poll conducted a year ago found that Americans were more likely to think the country had become better off over the course of Barack Obama’s presidency than worse off, 46 percent to 33 percent.

Even Republicans are more likely to say Trump has divided America than united it, 41 percent to 17 percent.

The AP-NORC polls surveyed 1,444 adults from Nov. 30-Dec. 4 and 1,020 adults from Dec. 7-11 using samples drawn from NORC’s probability-based AmeriSpeak panel, which is designed to be representative of the U.S. population.

Interviews were conducted online and using landlines and cellphones.