CITY OF SAN FERNANDO— Rotor, a local invention that provides giant lanterns their complex yet spectacular patterns of lights, still rules in today’s staging of “Ligligan Parul” (Giant Lantern Festival), a tradition that dates back to 1908 in this Pampanga capital.

Festival organizers continue to use rotors, although a University of the Philippines (UP) industrial engineering graduate, Alyosha Ezra Mallari, has developed an automated lighting system for the giant lantern that Arvin Quiwa made for Resorts World Manila in 2013.

“Old rotors will still be used … We cannot do away with tradition,” Gil Cortez, chair of the 2017 lantern festival committee, said on Friday.

But Cortez, a top basketball player in the 1980s, praised the 26-year-old Mallari for his innovation.

The 11 lanterns competing in the festival at Robinsons Starmills here will not only be 20 feet in diameter and fitted with a maximum of 10,000 light bulbs.

These will all have to rely on rotors for the seemingly magical play of lights that will sync with Christmas carols and modern songs in the contest’s three rounds.

The rotor operates like a sequencer. It is an aluminum sheet that is rolled like a barrel which can be as small as 3 inches long (baby rotor), or as big as 5 meters long, depending on the number of light patterns.

A steering wheel is welded to the rotor so lantern operators can turn it, or make a half or full circle, according to the type of light patterns that are set to flash during a performance.

Due to the lack of hairpins, which are the contact points for electricity to the bulbs, Efren Tiodin in 2014 used bicycle wheel cables.

A lantern can have five to 10 rotors, based on the number and variety of patterns.

But some craftsmen still rely on donations of residents to make a lantern that requires more than P1 million worth of materials and man hours. 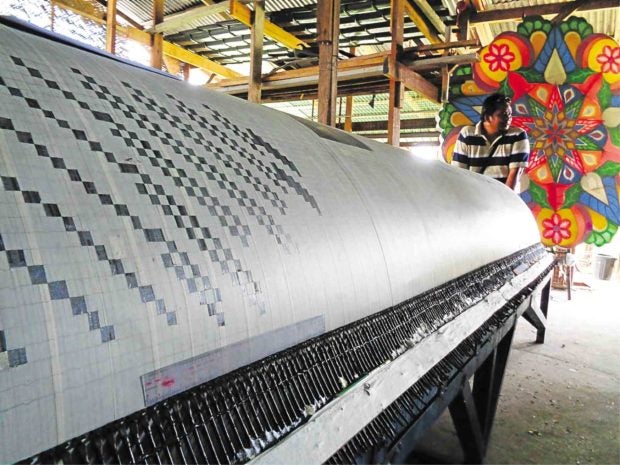 The rotor, which acts as a light sequencer, is regarded as
the “brain” of San Fernando’s giant lanterns. —TONETTE T. OREJAS

Mallari, a Ph.D. candidate in urban and regional planning, took an interest in the lantern industry when his mother, Juliet, a former UP Clark director, introduced him to San Fernando lantern makers like Arvin Quiwa in 2011 for a research.

While modernizing the giant lantern, Mallari said he still appreciated the brilliance of the rotor.

“The giant lantern is still more beautiful when it uses the rotor since the latter lights up more channels. In fact, I will always uphold the use of rotors because a machine cannot [replace] the human factor in this Kapampangan tradition,” he said.

Mallari said he was delighted at seeing rotor operators dancing to synchronize the lights and music which, he noted, was reason enough to keep the tradition alive.

Automation, according to Mallari, still brings some advantage to the festival because it does away with manual labor to light the giant lanterns.

“A machine can run the sequence of lights all night without an operator, thus overcoming the latter’s physical limitations … The size of our machine is as big as the CPU [central processing unit] of a computer, which is far smaller than the rotor making it more efficient in terms of logistics,” he said.

Mallari automated the lighting system of the giant lanterns used in the recent Association of Southeast Asian Nations Summit.