Reds used me but I used them, too - Duterte | Inquirer News
Close
menu
search

Reds used me but I used them, too – Duterte 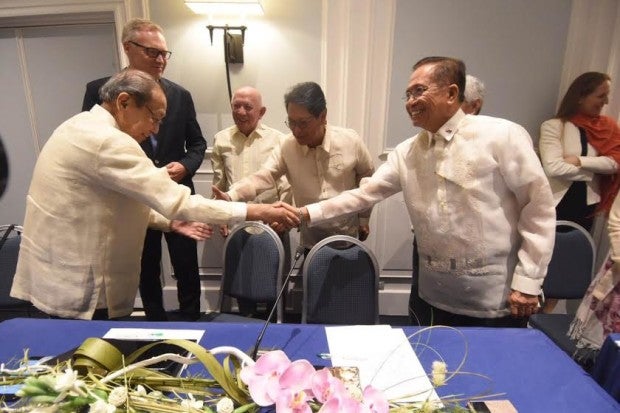 Presidential Peace Adviser Jesus Dureza (right), Labor Secretary Silvestre Bello III (second from right) , shake hands with Communist Party of the Philippines founder Jose Maria Sison (left) and Fidel Agcaoili (center) of the National Democratic Front of the Philippines after they sign an agreement in Rome, Italy, that would be the basis for future talks on socio-economic reforms. (Photo release from the Office of the Presidential Adviser on the Peace Process)

President Duterte admitted on Wednesday he had always known he was being used by the communist movement for their ulterior motives, but also used them for his.

“I accommodated them in the Cabinet hoping it would improve the quality of our communications, [so] I could tell them: ‘Compadre, can you pass this on?’,” Mr. Duterte told reporters in Taguig City.

“The purpose was there. We’re just using each other, and I was using them,” as he renewed his criticism of the communist movement in the Philippines.

The three officials chose to stay in Cabinet although relations between the president and communist leader Jose Maria Sison quickly deteriorated.

But after 13 months in office, the appointments of Mariano as agrarian reform secretary and Taguiwalo as social welfare secretary were rejected by the Commission of Appointments.

Maza, who is National Anti-Poverty Commission chair, Labor Undersecretary Joel Maglunsod and Presidential Commission on the Urban Poor chairman Terry Ridon were among the only leftists remaining in the administration.

But Ridon and other commissioners of the Presidential Commission on the Urban Poor were unceremoniously fired on Tuesday purportedly due to numerous junkets.

“In the last 50 years, I will ask you Filipinos, what did they do, even a small thing, what did the terrorist [New People’s Army], the communists, do for your lives? Give me one example and I will lift martial law,” he said.

“Give me one solid day or 24 hours or even half an hour when they went to one barangay and they did good,” he added.

The communists have done nothing but “recruit people to die and to kill, and to get the things of the people without their consent, and that is really brigandage or stealing,” Mr. Duterte said.

Mr. Duterte said he used to idolize Sison, his former professor, when he was still a student, but he soon realized Sison did nothing but cause problems.