Lacson questions budget raise given to DPWH next year 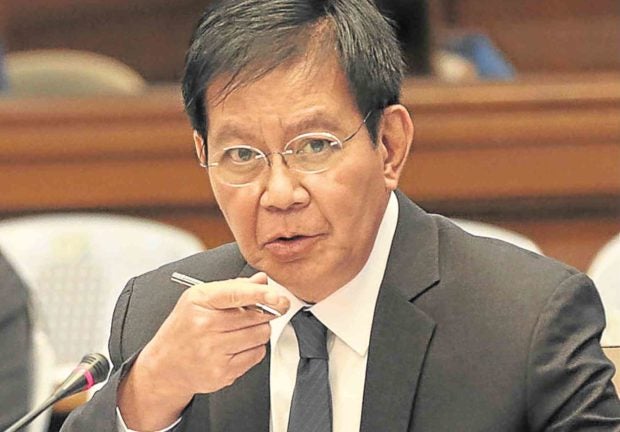 Senator Panfilo Lacson questioned on Tuesday the P11-billion raise given to the budget of the Department  of Public Works and Highways (DPWH ) next year as approved in the bicameral conference committee.

Lacson lamented that the P50. 7-billion slash  that he introduced in the Senate   was not only  restored  to the  DPWH  budget but an additional P11 billion  was also inserted during the bicam.

“I found out that under the DPWH, all the amendments that I introduced  were restored and  an additional P11, 089, 682, 672 was added to the  budget of the DPWH,” he  said on the floor when  Senator  Loren Legarda presented  to the floor the  bicameral report on the 2018 budget.

“Now,   I want to find out the details of the P11 billion plus the 50.7 billion that was slashed in plenary during the introduction of individual  amendments plus the P18 billion for  flood management   program which we requested DPWH to submit  to us the details of the right-of-way (ROW) of components,”  Lacson added.

He said he had earlier requested DPWH Secretary Mark Villar  to submit the  ROW component  of the  P50.7 billion since   the agency had only provided  the   P11 billion ROW components  with no list of claimants.

“Hindi na po ako interesado dun sa P50.7 billion  kasi nag-submit naman ang  DPWH ng ROW component even without the list of  claimants . I will tackle that during the  budget deliberation   of the 2019   General Appropriation Bill. That could come later,” Lacson said.

Responding to Lacson’s query,   Legarda promised to give  him  the  breakdown of the  P11 billion  increase of the DPWH budget by next week.

“I can live with that M.  President,”   Lacson said, “Before I came down, I promise myself to be kinder to you Mr. President.”

Despite his questions, Lacson did not object when the Senate voted to ratify the 2018 national budget.

Read Next
Congress finalizes P3.767-T budget for 2018
EDITORS' PICK
Look Through: The fate of impounded stray dogs
House energy committee chair Arroyo bats for cheap electricity
What to watch out for when selecting a video surveillance solution
23,000 cops to be deployed nationwide for school reopening
Unleash the photographer in you this World Photography Day with vivo smartphones
DOH says COVID-19 cases plateauing, but public shouldn’t be ‘complacent’
MOST READ
Sharon Cuneta asks for prayers for friend in ICU who suffered silent stroke
Light therapy could be the answer to your sleep problems
Korina Sanchez reunites with former ABS-CBN co-anchors Julius Babao, Cheryl Cosim
PBA: San Miguel ousts Meralco to arrange finals duel vs TNT
Don't miss out on the latest news and information.