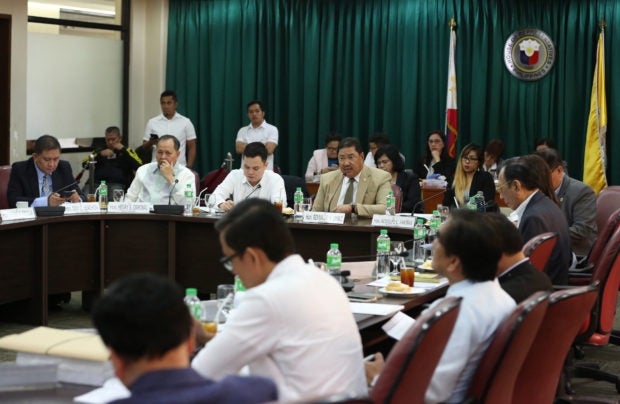 The Sereno impeachment hearing at the House of Representative

The camp of Chief Justice Maria Lourdes Sereno has cast doubt on the real intention of Supreme Court (SC) justices who testified against her in the impeachment hearing before the House of Representatives.

Lawyer Jojo Lacanilao, one of Sereno’s spokespersons, stressed that the matters raised by Associate Justices Teresita De Castro, Noel Tijam and Francis Jardeleza, as well as former Associate Justice Arturo Brion, had already been resolved by the SC.

“Why they would raise a settled matter to which they assented to, reflects on the intentions behind their belated complaints,” said Lacanilao in a statement on Tuesday.

Lacanilao took to task the remarks made by Justices De Castro and Tijam who accused Sereno of delaying the request of Justice Secretary Vitaliano Aguirre II to transfer the trial of Maute cases from Mindanao to Metro Manila.

De Castro said that Sereno “showed no respect and courtesy to the Court en banc” while Tijam said that the chief magistrate “arrogated” to herself Aguirre’s request for not following the proper procedure.

Lacanilao pointed out that on May 29, Aguirre only filed a letter addressed to Sereno, not a petition with the High Court.

Lacanilao noted that on June 5, all justices, including Tijam and De Castro, received Aguirre’s letter, the recommendations and a draft resolution. The en banc issued the resolution a day after, he said.

“Notably, Justice Tijam affirmed that the Chief Justice was the member-in-charge of the Maute cases, contrary to Gadon’s perjurious claims to the contrary. If the Chief Justice did not consult the en banc, then why did no one question the June 6 Resolution,” Lacanilao said.

He also noted that De Castro, as head of the Raffle Committee, signed the minutes of the committee where the Maute case was assigned to the Chief Justice.

For Sereno’s camp, Gadon’s accusation does not constitute an impeachable offense.