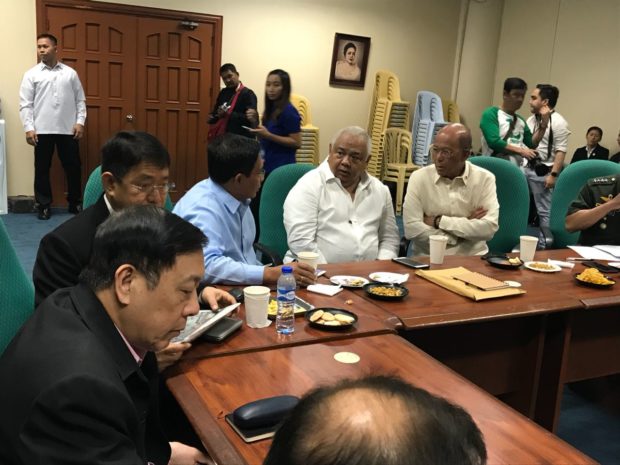 Palace and security officials led by Executive Secretary Salvador Medialdea (middle), National Security Adviser Hermogenes Esperon (left), and Defense Secretary Delfin Lorenzana (right) await the beginning of the briefing they would give Senators on December 12, 2017, regarding President Rodrigo Duterte’s request to extend martial law in Mindanao for one year – from January 1, 2018 to December 31, 2018. (INQUIRER.net / MAILA AGER)

Members of the executive department and some security officials met some lawmakers from the House of Representatives on Tuesday in a closed-door meeting to discuss President Rodrigo Duterte’s request to extend martial law in Mindanao for another year.

Earlier Tuesday, the officials briefed the senators ahead of the Congress’ joint session scheduled on Wednesday, Dec. 13.

Before attending the briefing, Alvarez said he does not see any basis to reject Duterte’s request.

Minority lawmakers, meanwhile, said in a press conference minutes before the caucus that they will oppose the extension of military rule in Mindanao as it would only lead to more cases of human-rights abuses in the region.

Last week, the President wrote a five-page letter asking the Congress to consider his request. Among the reasons behind the recommendation that Duterte cited were the continuous threats posed by different terror groups. /jpv