Football for Peace: Inspiring youths in conflict zones one goal at a time 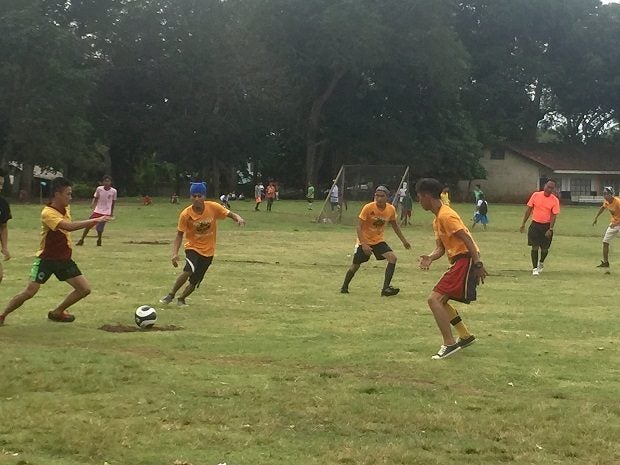 Young men in conflict areas in Mindanao play ball in the Football for Peace program of the Philippine Marines. CONTRIBUTED PHOTO

The objective was simple: to win the trust of children in the conflict-torn Sulu through football, hoping the rest of the community would follow suit.

Football was only a pastime for the marines in Sulu when they were not in combat. The aim of the game, usually played by two teams of 11 players, is to score more goals than the opponent. They try to maneuver the ball into the opposing team’s goal to make a score.

With its simple rules, the sport can be played anywhere, just like basketball. The marines played with children occasionally, but six years ago, Marine Lt. Col. Stephen Cabanlet, saw this as an opportunity to form closer bonds with children. At that time, Philippine football was on its revival as the national team Azkals were also on their way to prominence.

The goal was not primarily to make the children the best players but to establish the values of the sport — like discipline and friendship.

He narrated how they would ask the children to collect garbage before they would be allowed to play football.

Children are the most vulnerable in conflict zones like Sulu, a known stronghold of the Abu Sayyaf Group and a remote island marred with clan wars and violence.

Most of them have lost years of opportunity and good education because of violence and conflict. Some have shouldered responsibilities too young for them to handle, and others have resorted to taking up arms. Carrying guns is a way of earning respect.

Cabanlet, now commanding officer of the Marine Battalion Landing Team-1 based in Sulu, recalled seeing children in the mountains of Patikul during military operations when he was a young lieutenant. He surmised that some of them later joined the bandit group.

The Marine officer came up with the idea to use football as a tool to achieve peace, a weapon in the so-called “new battlefield,” to keep the children away from guns.

Football for Peace has since expanded six years from its conceptualization. It is now seen as a tool for countering violent extremism and conflict resolution. The program has also been adopted in other detachments of the Philippine Marine Corps.

Since 2011, the program has held over 50 tournaments across the country including Manila, in partnership with organizations like One Meralco Foundation and football team Loyola Meralco Sparks.

Football for Peace has also started bringing kids from conflict areas to Manila to let them live life beyond their hometowns. With the week-long activities, Cabanlet looks for sponsors for the children’s meals and trips to malls, museums, and amusement parks, in order to give them an experience they won’t soon forget.

But Cabanlet continues to dream big for the program: He hopes it would someday be adopted for policy-making to be sustained.