Duterte seeks martial law extension in Mindanao by a year 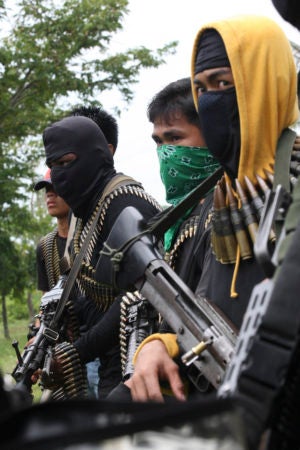 CONTINUING THREAT Members of the Bangsamoro Islamic Freedom Fighters (BIFF), shown in file photo, were involved in at least 15 violent incidents during the martial law period in Maguindanao and North Cotabato, according to President Duterte. —JEOFFREY MAITEM

In seeking a yearlong extension of martial law in Mindanao, President Duterte told Congress on Monday of persistent security threats in the region, including remnants of Islamic State-inspired extremist groups, the rise of a “potential successor” to slain terrorist leader Isnilon Hapilon, and increasing hostilities with communist insurgents.

In a letter to Senate President Aquilino Pimentel III and Speaker Pantaleon Alvarez, Mr. Duterte said extending martial law and the suspension of the privilege of the writ of habeas corpus for one year would help the military, police and other law enforcement agencies to “quell completely and put an end to the ongoing rebellion in Mindanao” and prevent it from spreading to other parts of the country.

Mr. Duterte cited Defense Secretary Delfin Lorenzana’s Dec. 4 letter recommending the extension of martial law based on the security assessment of the military.

In response to the President’s letter, House Majority Leader Rodolfo Fariñas said the Senate and the House of Representatives would have a joint session on Wednesday, the last session day of Congress this year, to discuss whether to grant the extension.

Mr. Duterte initially imposed military rule across Mindanao on May 23 to quell an uprising by local terrorists loyal to the Islamic State (IS) jihadist group in Marawi City.

Hundreds of gunmen rampaged through Marawi in what authorities said was part of a campaign to establish a Southeast Asian enclave for IS.

A military campaign backed by the United States, Australia and China took five months to defeat the terrorists, with the conflict claiming more than 1,100 lives and leaving large parts of Marawi in ruins.

“Despite the death of Hapilon and the Maute brothers, the remnants of their groups have continued to rebuild their organization through the recruitment and training of new members and fighters to carry on the rebellion,” Mr. Duterte said in his letter to Congress.

He said at least 185 people listed in the martial law arrest orders remained at large and “in all probability, are presently regrouping and consolidating their forces.”

Mr. Duterte said the Islamic militants had apparently found a “potential successor” to Hapilon as emir, or leader, of their planned IS province in the Philippines and Southeast Asia.

The President said a band of extremists known as the “Turaifie group” had been monitored to be planning to conduct bombings, notably targeting the Cotabato area.

The band is led by Esmail Sheikh Abdulmalik, alias Abu Turaifie, a former Moro Islamic Liberation Front and Bangsamoro Islamic Freedom Fighters (BIFF) leader who formed his own group, the Jamaatul Muhaajireen Wal Ansar, in April. His group is allegedly recognized by IS.

“Turaifie is said to be Hapilon’s potential successor as [leader of the IS province] in the Philippines and Southeast Asia,” Mr. Duterte said.

Hapilon was a leader of the notorious Abu Sayyaf bandit group and seen as the IS leader in Southeast Asia. He was killed in a targeted military operation in Marawi in October.

Mr. Duterte said the BIFF “continues to defy the government by perpetrating at least 15 violent incidents during the martial law period in Maguindanao and North Cotabato.”

He added that remnants of the Abu Sayyaf in Basilan, Sulu, Tawi-Tawi and Zamboanga Peninsula remain as a serious security concern.

The group has committed at least 43 acts of terrorism this year, including bombings and kidnappings, which resulted in the death of eight people, three of whom were beheaded, Mr. Duterte said.

“Last but certainly not the least,” the President cited the threat posed by the communist New People’s Army, whose members, he said, took advantage of the situation “while the government was preoccupied” with the IS-inspired terrorists.

He said the NPA rebels “intensified their decadeslong rebellion against the government and stepped up terrorist acts against innocent civilians, and private entities, as well as guerrilla warfare against the security sector and public and government infrastructure, purposely to seize political power through violent means and supplant the country’s democratic form of government with communist rule.”

Congress approved Mr. Duterte’s initial imposition of martial law on the whole of Mindanao and in July extended its enforcement to the end of December. Now Mr. Duterte wants Congress to extend military rule and the suspension of the privilege of the writ of habeas corpus in Mindanao up to Dec. 31, 2018.

An opposition lawmaker said the President’s request was tantamount to a “patent violation of the safeguards which the 1987 Constitution imposes for the limited grounds and duration of martial law and its extension.”

Albay Rep. Edcel Lagman described the move as a “malevolent perpetuation of the subjugation of the supermajority in Congress by the President even against the unequivocal provisions of the Constitution protecting civil liberties and the rule of law.”

“Where is the actual invasion or actual rebellion in Mindanao? The Constitution provides that martial law can only be declared and its extension authorized in case of invasion or rebellion when public safety requires it,” Lagman said.

“Since the original or initiatory declaration of martial law is limited to not more than 60 days, it stands to reason that any extension is subject to the same constraints with respect to duration and grounds,” he added.

Cagayan de Oro Archbishop Antonio Ledesma urged the government to enforce martial law in Mindanao only up the end of the year.

“In general, I am not in favor of it,” Ledesma told reporters on Monday.

He warned that the extension of military rule in Mindanao may adversely affect the island’s economy.

Presidential spokesperson Harry Roque challenged the opponents of the extension to question it in the Supreme Court.

“They’re free to challenge martial law anew in the Supreme Court, but please note that there [have] been two challenges and in both instances the Palace has been upheld,” Roque told reporters. —WITH REPORTS FROM JULIE M. AURELIO AND AFP