Jardeleza to Sereno: 'Who's the real treasonous one?' | Inquirer News
Close
menu
search

Jardeleza to Sereno: ‘Who’s the real treasonous one?’ 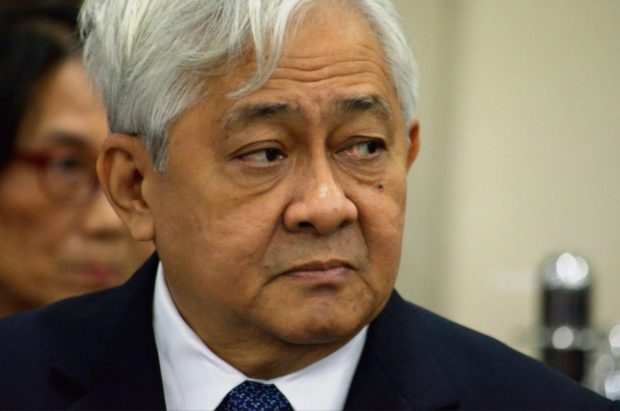 “Who’s the one who committed an act of treason now?”

Associate Justice Francis Jardeleza on Monday shot back at Chief Justice Maria Lourdes Sereno, three years after she attempted to block her appointment to the Supreme Court on the grounds of questions of integrity.

Jardeleza accused Sereno of using an “illegally secured” top-secret document concerning the country’s maritime dispute with China, as a basis for her objection to his inclusion in the shortlist of SC appointees in 2014.

In a rare public display of disdain for Sereno, he aired these allegations before the House of Representatives’ impeachment proceedings against Sereno, who was accused by lawyer Lorenzo Gadon of “manipulating” the Judicial and Bar Council’s processes.

The “top-secret” document referred to Jardeleza’s March 2014 memorandum detailing his position of excluding the Taiwanese-occupied Itu Aba from Manila’s arbitration case against China.

“She was not involved in the arbitration. The document she used was illegally secured,” he said, adding the memorandum he had lawyer Paul Reichler prepare was sent through foreign-made “secure email” to avoid leakage to the opponents.

The memorandum was meant to inform President Benigno Simeon Aquino III, who Jardeleza noted was not a lawyer, of the legal implications and risks of including Itu Aba in the arbitration case.

“Our case is a purely executive department activity. The judiciary is not included. The question is, how did it reach the Chief Justice? Who gave it to her?” he added.

Jardeleza maintained that Sereno’s objection was only hinged on a “difference of opinion… on an executive matter.”

Defending his stance, he maintained that including Itu Aba in the arbitration case came at the risk of it being recognized as an “island.”

If that happened, it would generate a 200-nautical mile exclusive economic zone for Taiwan, which could have overlapped with the Philippine EEZ off Palawan.

Itu Aba ended up being included in the case despite Jardeleza’s objections. Contrary to his worry, the United Nations-backed Permanent Court of Arbitration in its July 2016 decision ended up declaring it a “rock” incapable of generating an EEZ.

“As they say, the rest is history. Good thing we won,” he said.

But, he stressed: “While the case is pending, why would I be called a traitor to the motherland? In my opinion, you were the one who committed treason. You even used a top-secret document without impunity. You even aired to the public the disagreement in the legal team.”