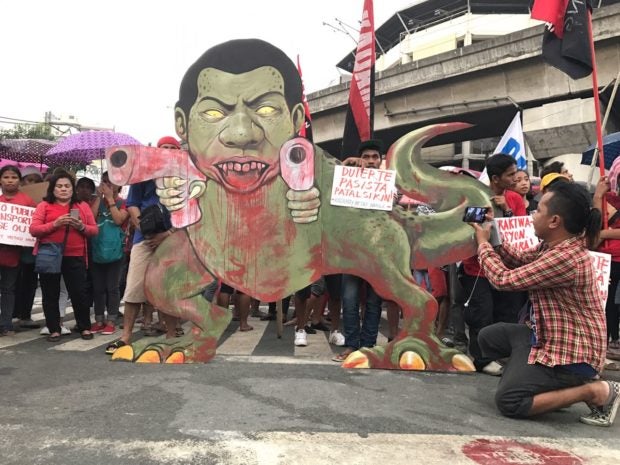 The militant group Kadamay on Friday marched towards Mendiola to call for the ouster of President Rodrigo Duterte over his administration’s “anti-poor” policies.

During the rally, the group burned what it called a giant “Duter-TRex” or “Duterte Tyrannosaurus,” an effigy showing Duterte’s head on a dinosaur holding two pistols, to condemn his administration’s “tyrannical rule.”

Some members of Kadamay also covered their bodies with black garbage bags and their mouths with masking tapes to protest the alleged summary killings under his rule.

Maricel Babatio, spokesperson for the group, said President Duterte is the “primary enemy” of the urban poor sector, stressing that he has failed his promises to the poor.

The group accused Duterte of doing nothing to alleviate and resolve poverty, homelessness, job insecurity, contractualization and rising prices of commodities.

“On his almost two years in office, Duterte only exposed himself to be merciless, harsh, hateful and tyrannous against the poor,” Babatio said.

Gloria Arellano, the group’s national chairperson, said the government was not only targeting “addicts,” stressing that it also wants to silence activists and critics.

The public should expect more protests calling for Duterte’s ouster in the coming days, according to Kadamay.

The group will join the protests in Bonifacio Shrine and Mendiola in Manila on Dec. 10 in time for the observance of International Human Rights Day, Babatio said.