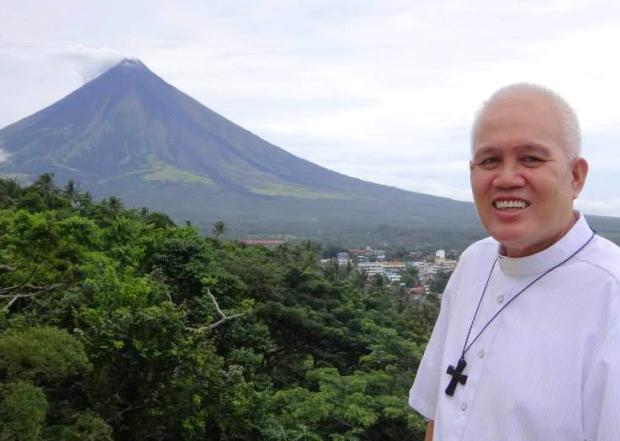 Bishop Elenito Galido poses with Mount Mayon in the background during his visit to Legazpi City in Albay in August 2013. (Photo from his Facebook page)

Iligan Bishop Elenito Galido passed away at 10:11 p.m. on Tuesday in an Iligan hospital, where he had been admitted after his arrival from a trip to the United States, he headed a delegation of Iligan’s singing priests who performed series of concerts for their special projects.

According to the Catholic Bishops Conference of the Philippines, he’s the seventh prelate to die this year.

Iligan City Vice Mayor Jemar Vera Cruz, a priest on leave, said Galido was diagnosed with fatty liver five years ago and was eventually on medication for a liver cirrhosis.

Galido chaired the Episcopal Commission on Culture (ECC) of the Catholic Bishops’ Conference of the Philippines (CBCP).

His fellow bishop remembers him as the one who had welcomed the evacuees from beleaguered Marawi City during the fighting that started on May 23 and raged on for five months between government forces and the Islamic State-inspired Maute Group.

Kalookan Bishop Pablo Virgilio David recalled this as he announced to his flock the passing of the Iligan bishop.

“Bishop Galido welcomed refugees in Iligan from neighboring Marawi, both Christians and Muslims, during the war,” David said. “He also sheltered his brother, MarawibBishop Edwin de la Peña of Marawi, during the siege.”

Galido’s remains were brought to St. Michael’s Cathedral for the wake. /atm