‘Bato’ orders mandatory use of body camera during anti-drugs ops 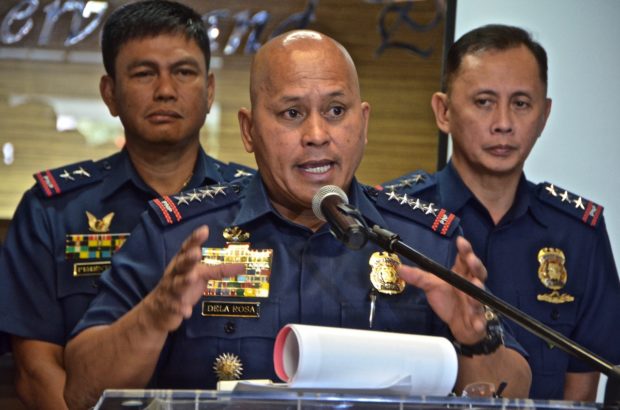 Philippine National Police (PNP) chief Director General Ronald “Bato” Dela Rosa has ordered the mandatory use of body cameras for policemen conducting anti-drug operations following President Rodrigo Duterte’s directive to give back to the PNP the government’s war on drugs.

In a press briefing on Wednesday, PNP spokesperson Chief Supt. Dionardo Carlos said Dela Rosa has three new directives to all PNP personnel: the use of body cameras during anti-illegal drugs operations, observance of extreme caution, and focus on their ranks’ internal cleansing.

“Let’s go full speed ahead but with extreme caution, because the intention is to lessen the number of casualties in the conduct of the implementation of the law,” Carlos said.

(There was also an order not to give an opportunity for erring policemen who are protectors of drug lords to sabotage the campaign that is why we intensified our internal cleansing.)

In a bid to ensure PNP’s transparency, Carlos said they would include all these orders in the memorandum circular they would be crafting.

He also said they would allow barangay officials, members of religious and various sectors, media, and nongovernment organizations to join their drug busts, so they could “see how ‘tokhang’ is being done.”

Carlos said they would still want to implement “Oplan: Tokhang” because it was the program which “delivered results.”

The PNP spokesperson added that the National Oversight Committee (NOC) would convene on Thursday to deliberate on the new implementing rules and regulations of the various operations against illegal drugs.

Carlos said that most likely by Monday, they would be able to craft the new rules and guidelines which would be coordinated with the Philippine Drug Enforcement Agency (PDEA), the lead agency in the conduct of the drug war.

Last Tuesday, the President signed a memorandum ordering the PNP and other law enforcement agencies to support PDEA’s anti-narcotics operations.

It could be recalled that Duterte transferred the leadership of the drug war to PDEA after allegations of human rights violations plagued the PNP. /jpv

Read Next
PNP not inclined to halt operations vs Reds
EDITORS' PICK
Pagasa: Warm, sunny Sunday in most parts of PH
vivo’s coming to town to grant wishes with more holiday promos
EDITORIAL: To a bike-friendly future
The Best Tech Gifts For The 2022 Holidays
Is it safe to talk politics again at family gatherings? ‘The Reconciliation Dinner’ shows us what that’s like
House energy committee chair Arroyo bats for cheap electricity
MOST READ
LOOK: Vhong Navarro transferred to BJMP detention facility in Taguig
The Elephant Man in the Senate
Posh village as ‘shabu’ haven
LOOK: Zanjoe Marudo bonds with Ria Atayde, her family
Don't miss out on the latest news and information.