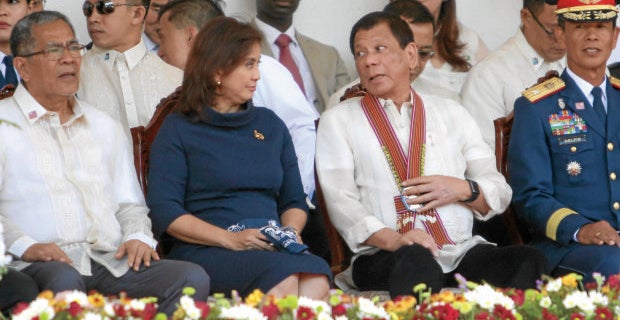 Vice President Leni Robredo on Wednesday said she supports the decision of President Rodrigo Duterte declaring as terrorist organizations the Communist Party of the Philippines (CPP) and its armed wing, the New People’s Army (NPA).

(For us, what is the real definition of terrorists? Terrorists are those who sow terror without any reason. These terrorists are the ones murdering civilians, and they are extortionists. For me, what the NPA is doing are terroristic activities and it is just fitting to declare them as terrorists.)

Robredo said it was reasonable for the Duterte administration to send a message that it would not tolerate any terroristic activities, whether it is committed by the Communist rebels or any ISIS-related groups.

(Terrorism, whether committed by NPA or Abu Sayyaf or ISIS-related… in sending a message that all terroristic activities are not welcome here I think that is an important message.)

In defining activities as terroristic, Robredo pointed out that there was no politics involved in doing so for as long as it is done to preserve national security.

(Whatever political color you are in, we need to fight terrorism because this is bad indeed—not only for our security but for the entire future of our country.)

On Tuesday, President Rodrigo Duterte signed the directive declaring the CPP and NPA as terrorist organizations under the Human Security Act.

Malacañang said this was because of the continued violent acts of the Communist groups, which “sow and create a condition of widespread and extraordinary fear and panic among the populace.”

Those providing financial support to terrorist organizations, including mining firms and other businesses, will also be held liable under the law. /jpv