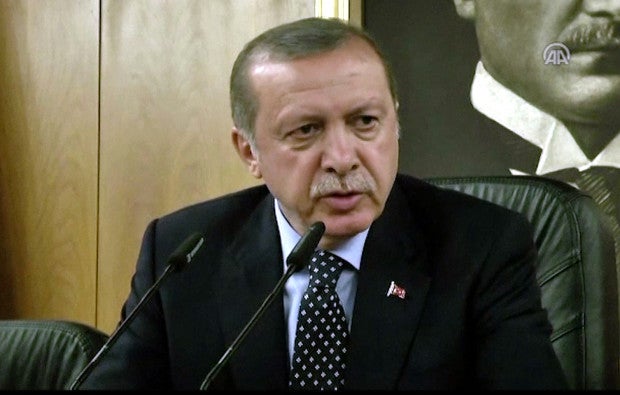 NEW YORK — Turkish President Recep Tayyip Erdogan said on Tuesday that the New York trial of a Turkish banker is a United States conspiracy being staged to “blackmail” and “blemish” his country.

His comments in Turkey’s capital Ankara came as the trial of Halkbank executive Mehmet Hakan Atilla continued in its second week, with Turkish-Iranian gold trader Reza Zarrab describing criminal activities he was forced to divulge after he pleaded guilty to seven charges in October and became a government witness.

Zarrab’s testimony would likely win him leniency against charges that otherwise could carry a prison term of up to 130 years.

Erdogan said the trial was a ploy to distract Turkey while Washington hatches plans to strengthen Syrian Kurdish groups, which Turkey considers to be “terrorists.”

But acting US Attorney Joon H. Kim has called “ridiculous on their face” claims that the prosecution is driven by Turkish politics.

“Frankly, it displays a fundamental misunderstanding of how our justice system works,” he said. “The defendants are charged with serious crimes. … That’s why the case is being brought, and that’s the only reason. Beyond that, I’ll let the evidence speak for itself.”

Atilla’s defense team has said he is “not corrupt.”

American authorities arrested Zarrab in March 2016 when he entered the US with his wife, his daughter, and four other people for a trip to Disney World. Zarrab was charged in a conspiracy to help Iran ignore US economic sanctions and flood financial institutions with a billion dollars of oil revenue.

In Zarrab’s fifth day on the witness stand, he was subjected to cross-examination from lawyer Cathy Fleming, who elicited confessions from Zarrab about his proclivity to use bribes to get what he wants, even after he was jailed in the US.

Zarrab testified that he never paid Atilla a bribe and that Atilla never asked him for money.

In a plea agreement entered as evidence in the trial, Zarrab admitted conspiring to bribe a guard at the Metropolitan Correctional Center to smuggle him alcohol and cellphones, which he used to call his relatives and a Turkish lawyer.

He said he paid the guard $45,000 to provide those items, along with some cold medicine that was not sold at the commissary. And he admitted smoking synthetic marijuana in the lockup, which is next to Manhattan’s federal courthouses.

According to the plea agreement, Zarrab also paid bribes to foreign officials and corporate representatives between 2002 and March 2016 in return for personal benefits, favorable business dealings and the protection of government officials. He admitted that he understated his revenues on tax returns in Turkey from 2002 to 2016 and procured prostitutes for other people in 2013.

Zarrab estimated that he made from $100 million to $150 million between 2010 and 2016 by carrying out various illegal schemes, including helping Iran dodge US sanctions with hundreds of millions of dollars.

As part of the plea deal, he has agreed to give up any illicit profits. He testified that he might be permitted to be released on bail once the trial is finished.

Turkish authorities have detained 17 people linked to Zarrab in an investigation launched after he cooperated with US authorities.                /kga