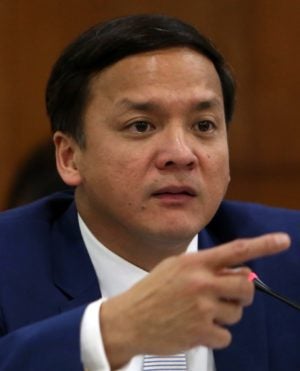 A committee created by Chief Justice Maria Lourdes Sereno to facilitate the release of benefits to survivors of deceased judges accomplished the opposite as it led to delays of up to two years, the Supreme Court administrator told the House impeachment hearing on Tuesday.

Many of the spouses of the deceased judges applying for benefits were already in their 80s or 90s, but the committee did not immediately take action on the applications, according to Jose Midas Marquez.

“From October 2015 to Nov. 6, 2017, no application was acted upon. If my calculation is correct, that’s a period of two years one month and five days,” Marquez told the panel.

To date, according to the Supreme Court official, only 12 of 29 pending applications for benefits for widows or widowers whose spouses died before 2010 have been granted by the high court since the new system was put in place.

Marquez headed the Office of the Court Administrator (OCA), which used to solely process the applications for approval of the full court until the Special Committee on Civil Service and Retirement Benefits was formed by Sereno and two other justices in November 2015.

The two other justices were the chairs of the Second and Third Divisions — Senior Justices Antonio Carpio and Presbitero Velasco Jr.

Upon questioning by Antipolo City Rep. Romeo Acop, Marquez said the creation of the Special Committee on Civil Service and Retirement Benefits had been in accordance with law.

“Is this illegal?” Acop asked.

Marquez replied that there was nothing illegal in a committee being created by the Chief Justice and two other senior justices.

He said he began looking into the issue in November last year upon receiving a text message following up on an application.

He said he later documented 29 claims for benefits pending before the TWGs.

But when Marquez brought up the urgency of the applications for benefits in a Jan. 12 letter, Sereno did not take any action.

“Nothing happened. There was no answer,” he said.

“Contrary to Marquez’s claims, the TWGs were not created by CJ alone. The TWGs were created because it was requested by the Special Committee on Retirement and Civil Service Benefits,” said her spokesperson, Jojo Lacanilao.

Lacanilao said Memorandum Order No. 43-2015 creating the special committee had been signed by the three justices “pursuant to their delegated power under SC En banc A.M. No. 99-12-08 SC (Re: Referral of the Administrative Matter and Cases to the Divisions of the Court, The Chief Justice and to the Chairmen of the Divisions for Appropriate Actions and Resolutions).”

Lacanilao said Sereno merely implemented the terms of the memorandum creating the special committee since it was empowered to recommend the creation of subcommittees to discharge its functions.

He insisted that the new system improved the application process for survivorship benefits.

“Under this new system, there has been significant improvement in the speed, efficiency and consistency in the processing of petitions for retirement benefits,” he said.

Delays in some “isolated cases” were justifiable, the spokesperson said.

“While there may be isolated cases where petitions have not been processed as fast as the others, the ‘delay’ was always for justifiable reasons, i.e., the pendency of administrative cases against the applicant, or the need for the Supreme Court en banc to resolve policy issues,” Lacanilao said.

“Such ‘delay’ cannot be attributed to the Chief Justice, as she is not responsible for the processing of petitions for retirement benefits,” he said.

Two technical working groups (TWGs) under the Special Committee on Civil Service and Retirement Benefits were subsequently formed by Sereno, the first one to screen applications and the second to resolve legal issues, Marquez said.

But he said it seemed the new processes only led to bottlenecks in the approval of benefits, such that some of the supposed beneficiaries were near death.

Lawyer Lorenzo Gadon, who filed the complaint against Sereno, identified one of the applicants as Dolores Colayco, the widow of Court of Appeals Associate Justice Jose Colayco.

The 70-year-old widow died even before the Supreme Court approved her application for benefits, Gadon said.

In 2010, Republic Act No. 9946 was passed granting the spouses of deceased judges the same retirement benefits due them.

The law amended RA 910, which did not provide similar benefits, thus leaving a legal question about its retroactivity or whether it should cover the survivors of retired judges who died before the law was passed.

Colayco was one of those cases.

It was only in September when the Supreme Court issued a policy decision determining that the survivors of deceased judges before 2010 would be granted the same benefits, though beginning only from that year.

Marquez, however, noted that before the creation of the committee and the two related TWGs, the Supreme Court had processed and released benefits for 271 beneficiaries whose spouses died before 2010 without issue.

He said a “random sample” of five cases from these beneficiaries took only two to three weeks from the time the OCA submitted its recommendation to the Office of the Clerk of Court en banc.