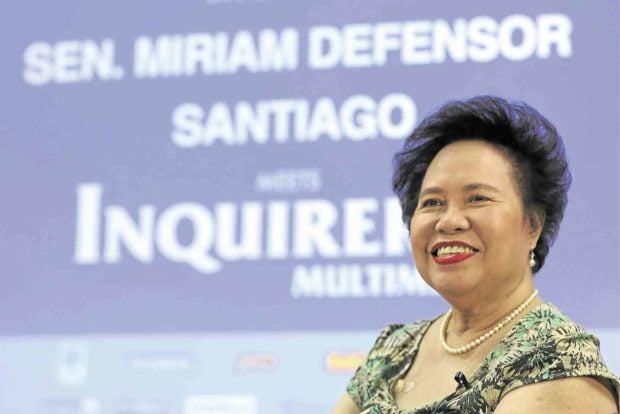 Sen. Sonny Angara has expressed appreciation on President Rodrigo Duterte’s move to nominate the late Sen. Miriam Santiago for the conferment of the Quezon Service Cross, the highest civil service award in the country.

“We are glad to receive here in the Senate the formal nomination of President Duterte to bestow our beloved Senator Miriam the Quezon Service Cross. We are also thankful that the President acted favorably on the request of Sen. Grace (Poe) and this representation for her nomination,” Angara said in a statement on Tuesday.

“The late Senator Miriam deserves no less than the President’s official endorsement for the nation’s recognition of her exemplary contribution as a public servant,” the senator added.

The Quezon Service Cross is awarded to a person “for exemplary service to the nation in memory of the late President Manuel L. Quezon.”

On September 26, two days before Santiago’s first death anniversary, Angara filed a resolution that seeks to bestow the award on the late senator. The resolution highlighted the laws that Santiago authored and her achievements as presiding judge of the Quezon City regional trial court, Immigration commissioner, and Agrarian Reform secretary.

Angara, who was elected in 2013, said in his resolution that Santiago “exceeded the qualifications” set for Quezon Service Cross, after serving “in such a manner and such a degree as to add great prestige to the Republic, or as to contribute to the lasting benefit of its people.”

Duterte stated that Santiago “used her considerable talents for the service of the people and our nation while exhibiting remarkable passion, courage and integrity. She inspired generations of Filipinos to aspire for excellence and remain steadfast against any challenge and adversity.”

The president also stressed that his former presidential seat rival was “an agent of positive and meaningful change in the country” for having “authored and sponsored laws that strengthened our fiscal position, promoted reproductive health, preserved the environment, safeguarded our women, enshrined human rights, enhanced our education system, gave greater access to information communications technology, protected against cybercrime, and asserted Philippine sovereignty.” /jpv