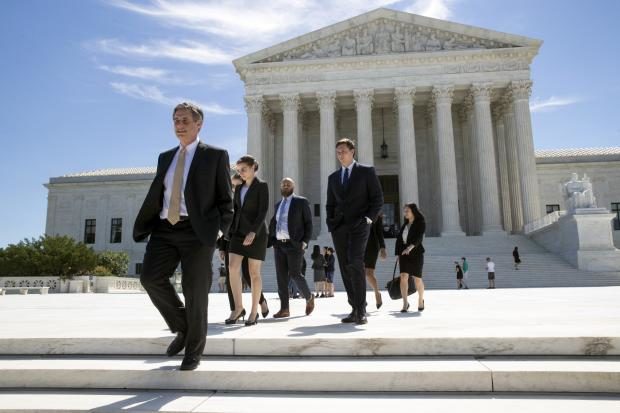 AUSTIN, Texas, United States — The U.S. Supreme Court on Monday let stand a Texas ruling that gay spouses may not be entitled to government-subsidized workplace benefits — a potential victory for social conservatives hoping to chip away at 2015’s legalization of same-sex marriage.

In June, the Texas Supreme Court overturned a lower court’s decision favoring spousal benefits for gay city employees in Houston, ordering the issue back to trial. That was a major reversal for the all-Republican state high court, which previously refused to even consider the benefits case after the U.S. Supreme Court ruled in the landmark Obergefell v. Hodges decision that the Constitution grants gay couples who want to marry “equal dignity in the eyes of the law.”

The Texas court changed its mind and heard the case amid intense pressure from Republican Gov. Greg Abbott, Lt. Gov. Dan Patrick and Attorney General Ken Paxton, as well as dozens of other conservative elected officials, church leaders and grassroots activists. They argued that the case may help Texas limit the scope of the Supreme Court ruling, especially in how it is applied to states.

Monday’s U.S. Supreme Court decision to reject Houston’s appeal of the Texas court decision came without dissent or comment. The case began with a coalition of religious and socially conservative groups suing America’s fourth-largest city in 2013 to block a move to offer same-sex spousal benefits to municipal employees.

“Today’s abnegation by the nation’s highest court opens the door for an onslaught of challenges to the rights of LGBTQ people at every step,” Ellis said in a statement.

But other advocates said Monday’s action simply shows the Texas case is not fully concluded, rather than indicating how the U.S. Supreme Court will ultimately rule on the larger issue.

“There was high hope that the Texas decision was so wrong that the court wouldn’t sit by and let it go,” said Kenneth Upton, a Dallas-based attorney for the prominent LGBT-rights group Lambda Legal. “That’s not how it works with the Supreme Court.”

Houston has been paying same-sex benefits amid the case’s developments and will continue to do so while it progresses through lower Texas courts. The city argues that the 2015 legalization of gay marriage meant all marriages are equal, so anything offered to opposite-sex couples must be offered to same-sex ones.

Conservative groups counter that the U.S. Supreme Court didn’t declare spousal benefits a fundamental right of marriage two years ago, and that it should be up to states to decide. They also see a chance for Texas to defend religious liberty under a state gay marriage ban that voters approved in 2005.

Jared Woodfill, a Houston attorney and conservative activist at the center of the case, called Monday’s action by the nation’s high court, “A nice early Christmas present.”

“The U.S. Supreme court could have taken the case and used it to further expand Obergefell. They chose not to,” he said. “It’s confirmation that the Texas Supreme Court got it right.”

Woodfill said that religious liberty groups in two other states had contacted him in years past, seeking information about Texas’ legal challenge.

“It obviously has precedential value, not just for Texas but the entire country,” Woodfill said. However, the court has said on several occasions that the denial of such petitions “without more has no significance as a ruling.”

In August, three Houston city employees and their spouses sued the city in federal court, concerned that the civil case could force the city to stop paying same-sex benefits. A federal judge dismissed that case last month, saying it was too early since the civil case was still proceeding. Upton, who represented the city employees, said they were ready to sue again depending on what happens in Texas courts. /cbb