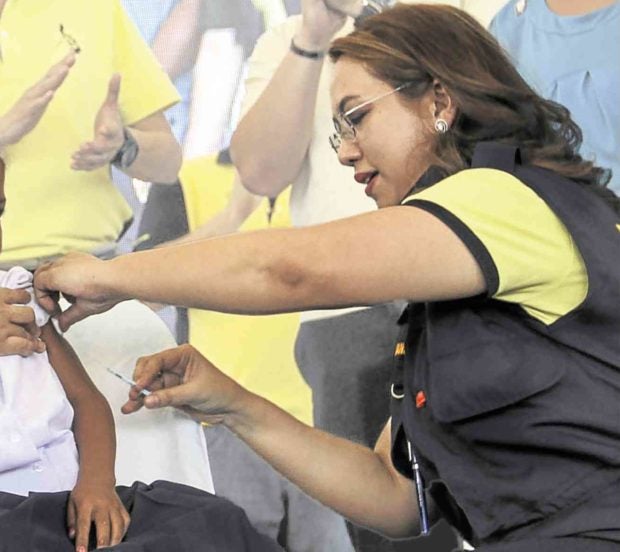 FILE –  In April 2016, the government introduced to the country’s public health system the world’s first vaccine developed to combat dengue fever. A much-publicized immunization drive targeted over 700,000 schoolchildren, among them this girl in Iba, Zambales province, whose shot was administered by then Health Secretary Janette Garin. —MALACAÑANG PHOTO

Apologizing for being “incommunicado for the past two days” due to her ailing father, Garin, a former representative of Iloilo’s first congressional district, welcomed the investigation that will be conducted by the Senate and Department of Justice.

But she pointed out that the vaccination program plan started even before her stint at the Department of Health (DOH).

“I will answer all questions at the right time and in the appropriate forum. I will also await clarity from DOH and (World Health Organization) as they are the authorities on this,” she said in a statement.

Garin said the program was implemented in accordance with WHO guidance and recommendations.

“Even before the official release of the (Strategic Advisory Group of Experts), there were ongoing meetings and consultations between experts, WHO and DOH technical officials,” she said.

“We fully cooperated and consulted with WHO prior to the implementation of this program. With the desire to resolve this deadly virus, the Department started the vaccination program which has until now been seen to be strongly beneficial to 9 out of 10 Filipinos,” she said.

“In the event that there will be authorities who will point culpability to me, I am ready to face the consequences. For the meantime, may I request your understanding of my decision to be with my father in his last few breaths. After settling this personal matter, I will be at your disposal,” Garin said.