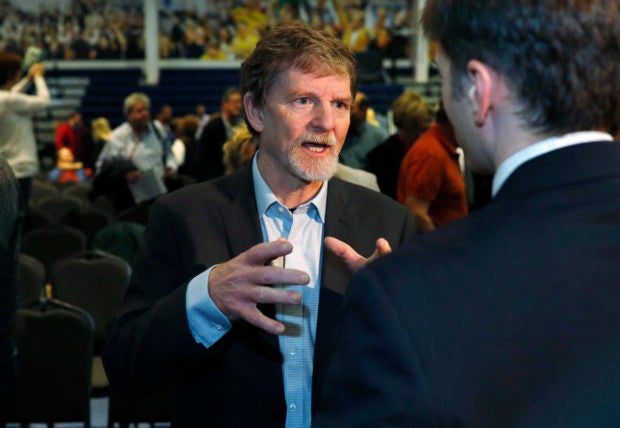 In this Nov. 8, 2017, file photo, Jack Phillips, owner of Masterpiece Cake, speaks to supporters after a rally on the campus of a Christian college in Lakewood, Colorado. On Dec. 5, the US Supreme Court will hear argument about the baker who refused to make a cake for a same-sex couple. AP

WASHINGTON, United States — The upcoming Supreme Court argument about a baker who refused to make a cake for a same-sex couple makes some civil rights lawyers think of South Carolina’s Piggie Park barbecue.

When two African-Americans parked their car at a Piggie Park drive-in in August 1964 in Columbia, South Carolina, the waitress who came out to serve them turned back once she saw they were black and didn’t take their order.

In the civil rights lawsuit that followed, Piggie Park owner Maurice Bessinger justified the refusal to serve black customers based on his religious belief opposing “any integration of the races whatsoever.”

“Undoubtedly defendant Bessinger has a constitutional right to espouse the religious beliefs of his own choosing, however, he does not have the absolute right to exercise and practice such beliefs in utter disregard of the clear constitutional rights of other citizens,” U.S. District Judge Charles Earl Simons Jr. wrote in 1966.

By the time the Supreme Court heard the case in 1968, the issue was the award of fees to the lawyers representing the black South Carolinians who sued Bessinger’s restaurants. But in a footnote to its unsigned 8-0 opinion, the court called the religious freedom argument and Bessinger’s other defenses “patently frivolous.”

Fifty years later, civil rights lawyers are pointing the Supreme Court to Bessinger’s case in support of Charlie Craig and David Mullins, the gay couple who were turned away by Colorado baker Jack Phillips, giving rise to the high court case that will be argued Tuesday.

“The logic of Piggie Park and other precedents overwhelmingly rejecting religious justifications for racial discrimination apply squarely to the context of LGBTQ discrimination,” the NAACP Legal Defense and Educational Fund said in a Supreme Court brief. The fund also represented the people who sued Piggie Park.

Both cases involve laws intended to prevent discrimination by private businesses that open their doors to the public. In the case of Piggie Park, the law was the Civil Rights Act of 1964. The bake shop case involves the Colorado Anti-Discrimination Act, which prohibits businesses from refusing to sell their goods to people on the basis of sexual orientation among other things.

As the case has come to the justices, the focus is on Phillips’ speech rights, not his religious beliefs. As a cake artist, he claims a right not to say something with which he disagrees.

Phillips’ lawyers also say the baker’s issue is not with gay people, but rather same-sex marriage. He will sell any pre-made goods to anyone who walks in the store, lawyers for the Alliance Defending Freedom, representing Phillips, said.  He also would make a cake celebrating “a marriage between a man and a woman even if one or both spouses identified as gay, lesbian or bisexual,” his lawyers wrote.

Laws that regulate speech, as Phillips’ team asserts the Colorado anti-discrimination law does, often must withstand the toughest level of review that courts can apply, known as strict scrutiny. His lawyers rely on a 1995 unanimous Supreme Court decision allowing organizers of the St. Patrick’s Day parade in Boston to exclude a gay rights group from the parade.

But both Phillips and the Trump administration, which entered the case on Phillips’ side, said speech restrictions aimed at race might be different.

A ruling for the baker would not call into question the use of public accommodations laws to prohibit racial discrimination, the administration said in its Supreme Court brief.

“As the court recently observed, ‘racial bias’ is ‘a familiar and recurring evil’ that poses ‘unique historical, constitutional and institutional concerns,'” the administration said, quoting from a decision this year in a case about racial discrimination among jurors. /cbb