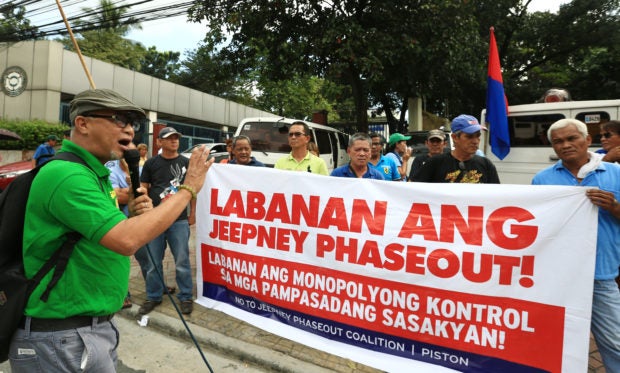 Piston (Pinagkaisang Samahan ng mga Tsuper at Opereytor Nationwide) on Sunday deferred the two-day strike over the phaseout of old jeepneys to give way to the hearing called by the Senate public services committee chaired by Sen. Grace Poe for Thursday.

“[W]e will instead hold protest caravans and rallies on Monday and Tuesday,” Piston president George San Mateo said in a press conference in Quezon City.

Transportation groups on Panay Island will push through with protest caravans despite the cancellation of the transport strike in Manila and other areas.

Edgar Salarda, coordinator in Panay of Piston, said protest caravans and rallies would be held in Iloilo, Capiz and Aklan on Monday.

Malacañang, Poe and the Land Transportation Franchising and Regulatory Board (LTFRB) welcomed the decision of Piston to call off the jeepney strike.

Piston staged a two-day transport strike in October to protest the PUV (public utility vehicle) modernization program but President Duterte stood firm on his decision that old jeepneys be replaced by Jan. 1.

“If you can’t modernize that, leave. You’re poor? Son of a bitch, go ahead, suffer in poverty and hunger. I don’t care,” Mr. Duterte said in the wake of the strike.

Classes in schools and work were called off during the strike, which Piston claimed crippled 90 percent of jeepney transportation in key urban centers although the LTFRB said the mass action was barely felt in most parts of the country.

The proposed modernization program will affect 270,000 jeepneys nationwide and displace around 650,000 drivers, according to the Crispin B. Beltran Research Center.

Presidential spokesperson Harry Roque said on Sunday that the Palace was optimistic that Piston would eventually support the long-delayed PUV modernization program.

Roque said in a statement that the modernization program “aims to provide our commuters a safer, more reliable, convenient, environment-friendly and dignified commuting experience.”

Poe said she would invite Transportation Secretary Arthur Tugade to the Senate hearing scheduled for Thursday.

“We are expecting [Tugade] will attend because this is an important hearing and the welfare of the majority of the people is at stake here,” she said in a statement.

The senator said the hearing hoped to deal with the concerns of the transport sector about the planned jeepney modernization program.

“Issues can be better discussed and resolved when sobriety and judiciousness are exercised in pursuit of the highest public good,” Poe said.

“That’s what we don’t hear from DOTr (Department of Transportation), which, instead of facing you, would threaten you with cases and harass you,” he said.

San Mateo said he hoped Tugade and other officials of transportation agencies would show up at the hearing.

Aileen Lizada, LTFRB board member, said LTFRB enforcers had been directed to check the routes and terminals of members of Piston and its allied transport groups to verify that no strike would be held.

“We will not rely on [the announcement of the strike cancellation at] the press conference. We cannot afford surprises for the riding public,” Lizada told reporters.

San Mateo said the protest caravan by Piston members and supporters would begin at Welcome Rotunda in Quezon City around 8 a.m. on Monday. They will proceed to Chino Roces (formerly Mendiola) bridge near Malacañang.

On Tuesday, another rally will be held to protest the LTFRB’s filing of a criminal suit against him, San Mateo said.

The LTFRB sued San Mateo for violating the Public Service Law by organizing a jeepney strike on Feb. 27 and for violating an LTFRB circular that bars PUV operators from resorting to cessation of transport service.

If found guilty, the violator may be meted out a P2,000 fine, a jail term of up to two years, or both.

Mr. Duterte has called Piston a front organization of the Communist Party of the Philippines.

“I’m just telling the truth. [The human rights group] Karapatan, [the labor group] KMU (Kilusang Mayo Uno), Piston, they are the legal fronts of the Communist Party of the Philippines,” the President said.

“It’s a one big conspiracy but … all of them are committing right now rebellion,” he added. —With reports from Philip C. Tubeza and Christine O. Avendaño