Stories of gratitude, kindness for kids in the spirit of the season | Inquirer News
Close
menu
search

Stories of gratitude, kindness for kids in the spirit of the season 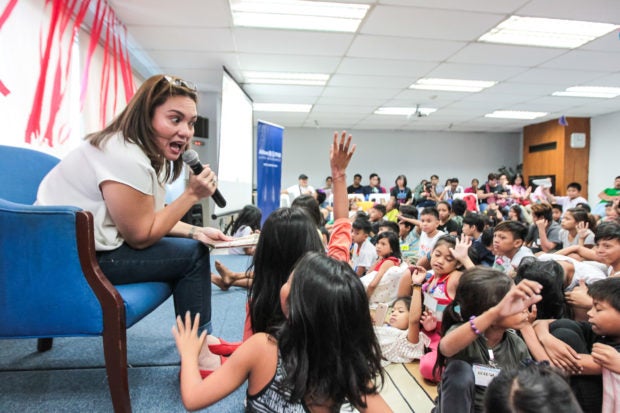 In the spirit of the holiday season, tales emphasizing gratitude and kindness were told to some 150 children during a special Inquirer Read-Along session at the Inquirer main office in Makati City on Saturday morning.

The teachers opened the session with the story “Ang Sapatos ni Mommy” by Segundo Matias Jr., which dwells on the sacrifices a mother makes to give her children a good life.

Rodriguez read “Si Langgam at si Tipaklong,” as retold by Alberta Angeles, a book about friendship that springs from simple acts of kindness.

The story is a timely Christmas tale about the friendship of two children from different social classes who often compare their lives, each longing for what the other has.

“The experience of reading to young children feels so good. It makes me feel fulfilled. It’s a new blessing for me to be able to talk in front of kids and have them listen to my story,” said Sanchez, who stars in ABS-CBN’s latest afternoon drama “Hanggang Saan.”

She said it was her first time to read to kids.

“I enjoyed the noise and active participation of the kids. Though it was a bit difficult because there were kids crying and talking, I was able to practice my focus, too. I gained that too from the experience of storytelling,” Sanchez said.

She said she wanted the children to understand what jealousy was and to push it away because it could lead them to doing bad things.

“This is not an easy thing to do because everyone gets jealous. It’s part of being a human. But through self-love and prayers, we can overcome that and start appreciating what we have,’’ the actress added.

Sanchez ended her storytelling session with a prayer of gratitude together with the children.

The young listeners in Saturday’s session were from Child Hope, St. Mary’s of the Woods Makati and St. Mary’s Academy Manila.

Cyrus said the story was meaningful because the two friends learned to value what they had in life. “The two boys from the story were missing something. One didn’t have a family and the other one didn’t have anything to eat. We shouldn’t tease other people if they don’t have something,” he said.

Almira, 9, also from St. Mary’s Academy, liked “Si Langgam at Si Tipaklong” best because the story allowed her to think about how she could help other people.

Also launched during the session was #ReadAlong4Kindness, a series of thematic sessions with the reading of story books about kindness. This is a takeoff from the theme of the recent festival #ReadAlong4Hope.