Construction waste, other garbage dumped in part of Subic forest 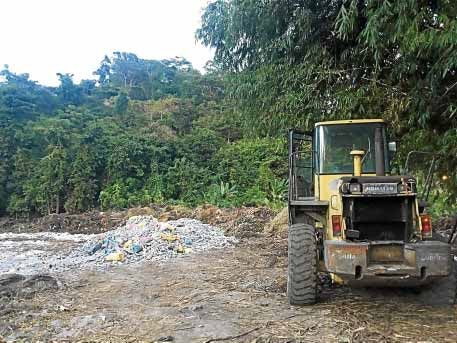 A portion of wetlands inside the Subic Bay Freeport has been turned into a dump. Residents living near the area are protesting as a section of the marshland has been damaged. CONTRIBUTED PHOTO

SUBIC BAY FREEPORT — The Subic Bay Metropolitan Authority (SBMA) has shut down a disposal area near a forest here, heeding complaints that construction debris dumped there may have destroyed the habitat of plants and animals there.

Amethya dela Llana, manager of the SBMA Ecology Center, slapped the operators of the disposal area with a closure order and directed the agency’s maintenance and transportation department to clean it up.

The team also confirmed the presence of construction debris and piles of trash that were scraped and pushed into the forested area, she said.

She said the team reported that the area had drawn flies due to noxious odor.

Dela Llana ordered Angel Bagaloyos, manager of the
SBMA maintenance and transportation department, to explain in writing why he allowed the disposal of residual wastes in the area.

One of the complaining residents said a bulldozer owned by the SBMA was seen flattening what she described as a “mountain of construction debris” on Friday.

“Aside from this area being part of the forest where animals and birds cross freely, we fear this would become an open invitation to unscrupulous characters to also dump their garbage,” the resident said. “We also discovered there was a second dumping site a few meters into the forested area.”

Other residents said they also saw garbage bags hidden under dried leaves, indicating that there was a deliberate attempt to conceal the trash. —Allan Macatuno