An average of 31 new cases a day were reported in July and August this year; risky sex practices behind the alarming figures
By: Tina G. Santos - Reporter / @santostinaINQ
Philippine Daily Inquirer / 07:16 AM December 03, 2017 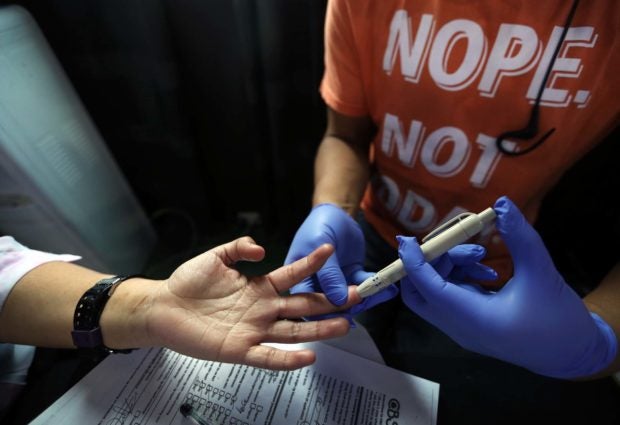 Risky sexual behavior and practices, as well as the lack of government policies focused on prevention, have contributed to the steep rise in the number of human immunodeficiency virus (HIV) cases among Filipinos, particularly among the youth and men having sex with men (MSM).

Based on the latest HIV/AIDS Registry of the Philippines, 1,962 new HIV cases were reported from July to August this year, or an average of 31 cases a day.

“There is really a problem with the sexual behavior of those newly tested,” Solante said in an Inquirer interview on the 29th observation of World AIDS Day on Friday.

Human Rights Watch (HRW) researcher for the Philippines Carlos Conde, however, blamed the “government’s policy failures” for fueling the epidemic.

“We’re not so much concerned about the sexual behavior of MSMs as the key affected population. To us that is not the issue,” said Conde, who last year wrote the report “Fueling the Philippines’ HIV Epidemic: Government Barriers to Condom Use by Men Who Have Sex with Men.”

Among the government policy failures that Conde mentioned were the lack of a national condom promotion strategy or campaign addressing MSMs, the stigma attached to the disease, the lack of sex education in schools and the government’s focus on treatment and testing instead of prevention.

The latest HIV/AIDS registry indicated that of the 1,962 new cases, 250 had developed into full-blown AIDS.  Most of the cases, or 95 percent, were males.  More than half of the cases reported were from the 24-34 age group, while 31 percent were aged 15-24.

Citing “The Special Report: State of the Philippine HIV Epidemic 2016” published by the Department of Health (DOH) and the Epidemiology Bureau, Solante estimated that currently, 56,000 Filipinos are living with HIV, a virus that infects cells of the immune system, making the patient vulnerable to infections.

HIV is usually transmitted through unprotected sexual intercourse and the transfusion of contaminated blood. It can also be transmitted between a mother and her child during pregnancy and childbirth and through breast-feeding.

According to the World Health Organization, the most advanced stage of HIV infection is acquired immunodeficiency syndrome (AIDS), which can take from two to 15 years to develop, depending on the individual.

AIDS is defined by the development of certain cancers, infections and other severe clinical manifestations.

Solante said the study projected that, if unchecked, the number of HIV cases in the Philippines would balloon to 142,000 by 2022.

He added that apart from risky sexual behavior, curiosity among the young might be partly responsible for the rise in HIV/AIDS cases.

“There are so many gaps … family disconnect, peer influence, highly conservative family or society, religion. Definitely if you’re studying in a Catholic school, these things are not being discussed. (Sex is) still a taboo issue,” he added.

“Recent numbers indicate that we need to be teaching our children about this disease early.  As uncomfortable or taboo as that conversation is, it can quite literally save lives,” he said.

“Ultimately, HIV is a very behavior-centric disease. If we avoid certain behaviors, we are reasonably sure we can avoid contracting or spreading it,” Solante explained.

“All of my patients, I ask them if they are wearing condoms regularly, (and they said) they believe in using condoms but they don’t wear them,” the doctor said.

Conde, meanwhile, deplored the information campaign on HIV/AIDS that, he said, deferred too much to the Catholic Church and other conservative sectors of society.

“If you look around, you can’t see a condom advertisement that features or targets MSMs. It’s all heteronormative. The word ‘condom’ is not even used in these ads, clearly a deference by the advertising industry to the conservatives and the Catholic Church,” Conde said.

“Promoting condoms among young MSMs is crucial because of the role unsafe sex plays in HIV infection,” he added.

“There’s also hardly any safe sex education going on, particularly in high school. The key affected population is growing younger but they are not equipped with the proper knowledge on safe sex. Couple that with stigma and we really have a problem,” the country’s HRW researcher said.

The Philippine Drug Enforcement Agency (PDEA) recently came under fire for disclosing the HIV+ status of one of the suspects arrested in the agency’s drug raid on a plush hotel at Bonifacio Global City on Sunday, as this could stigmatize the suspect.  The PDEA has since apologized.

The Department of Education and DOH have not been decisive enough about promoting safe sex, including condom distribution, Conde said.

And while focusing on treatment and testing is good, “the government should give equal attention to prevention,” Conde said, adding that the government “should resist the pressure from conservatives for the sake of the public, especially the young, the marginalized and stigmatized.”

While HIV rights and support groups are filling in the vacuum left by the government on preventive measures, these nongovernment organizations can only do so much, Conde said.

“It is the responsibility of the government to take the bull by the horns and defeat the spread of HIV through massive safe sex education and condom promotion. It takes political will to do it, of course, and a willingness to stand up to the conservatives,” he added.