Opponents in LGBT case agree: It’s not about wedding cake 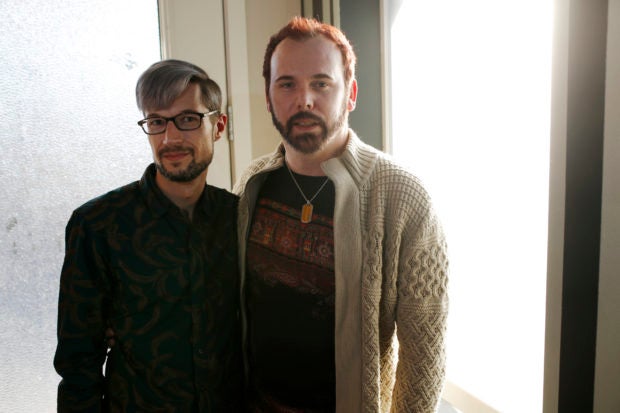 In this Tuesday, Nov. 28, 2017, photograph, Charlie Craig and David Mullins are shown in their home in Denver. The Colorado couple is at the core of a legal case that goes before the U.S. Supreme Court for oral arguments on Tuesday, Dec. 5 in which Denver-area baker, Jack Phillips, cited his Christian faith in refusing to make a cake for the gay couple’s wedding celebration in 2012. (AP Photo/David Zalubowski)

In a legal case with profound implications for LGBT rights and religion’s place in public life, the opposing sides agree on this: It’s not about the cake.

At its core, the case that goes before the U.S. Supreme Court for oral arguments on Dec. 5 is a showdown between a gay couple from Colorado and a Denver-area baker who in 2012 cited his Christian faith in refusing to make a cake for their wedding celebration.

Jack Phillips, owner of Masterpiece Cakeshop in Lakewood, was judged through multiple phases of litigation to have violated Colorado’s anti-discrimination law. Through his lawyers, he now gets to argue before the highest court in the land that he’s an artist who should not be compelled to create a cake that contradicts his religious views.

For Phillips’ legion of supporters — including conservative politicians, advocacy groups and religious institutions — the case has ramifications for creative professionals of all kinds.

“Every American should be free to choose which art they will create and which art they won’t create without fear of being unjustly punished by the government,” Phillips recently told a rally of local supporters.

For advocates of LGBT rights, the stakes are perilously high. They fear a Supreme Court ruling in Phillips’ favor would open the door to discrimination by a wide range of business owners and entrepreneurs.

“If a baker can reject LGBTQ people because of who we are, then what about the mechanic, the florist, the doctor, the teacher?” Strangio asked. “This is not about cake. This is not about art. This is about survival.”

The case reaches the Supreme Court at a stressful time for the LGBT rights movement.

Just two years ago, the high court delivered the movement its greatest victory — a 5-4 decision paving the way for same-sex marriage to become legal nationwide. But that achievement, coming just 11 years after Massachusetts became the first state to recognize gay marriage, has been partly offset by subsequent political developments.

The sweeping Republican election victory in November 2016 solidified social conservatives’ dominance in Congress and a majority of states and set the stage for President Donald Trump’s administration to roll back several LGBT-friendly initiatives undertaken during Barack Obama’s two terms in office.

Protections for transgender students have been weakened, and Trump is seeking to ban transgender people from military service. In October, Attorney General Jeff Sessions — a longtime skeptic of LGBT-rights initiatives — issued “religious exemptions” guidance that could override many anti-discrimination protections for LGBT people and others.

The net result: LGBT activists see little prospect of short-term progress at the federal level, even as they remain heartened by the ever-growing ranks of corporations and local governments that are acting to make LGBT people feel welcome and to curb discrimination against them. The local laws can be important, given that only 21 states have statewide laws barring discrimination against gays and lesbians in public accommodations.

Lambda Legal, a prominent LGBT-rights group, was among dozens of organizations submitting briefs to the Supreme Court on behalf of the Colorado couple, Charlie Craig and David Mullins.

The group argued that LGBT people, for all their recent civil rights advances, still encounter varied forms of discrimination in the public square. Among its examples: a lesbian couple denied infertility treatment in San Diego, a gay Iowa couple rebuffed in efforts to rent a wedding venue, a transgender man turned away from a New Jersey hospital where he sought a hysterectomy.

“This is why nondiscrimination laws like Colorado’s are so important,” wrote Lambda’s law and policy director, Jennifer Pizer. “So that people can live their lives without fearing that, at any moment, they may be turned away or verbally abused just for who they are.”

Craig and Mullins spent only a few moments at the bakery in 2012 before Philipps’ rebuff hit home.

“There was horrible pregnant pause,” Mullins recalls. “It was publicly humiliating and it was painful.”

“Never in a million years did we think that five years later we’d be going to the Supreme Court,” he said. “It’s been emotionally trying. You sort of have to relive that pain again and again.”