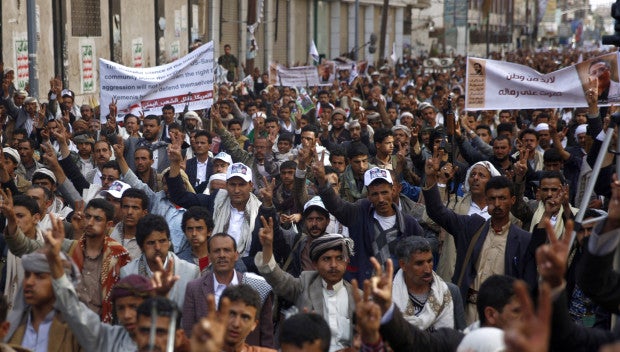 The missile targeted the southern Saudi city of Khamis Mushait, with authorities reporting no casualties, just hours after the rebels threatened to retaliate over a crippling blockade on Yemen.

A Saudi-led coalition fighting the rebels imposed the blockade in response to a Huthi missile that was intercepted near Riyadh airport on November 4. The United Nations (UN), however, has warned that the blockade is deepening Yemen’s humanitarian crisis.

The missile attacks underscore the growing threat posed by the raging conflict in Yemen, and represent a new escalation of the coalition’s war against the Shiite rebels.

“The missile heading towards the city of Khamis Mushait was intercepted and destroyed without any casualties,” the Saudi Press Agency quoted coalition spokesman Turki al-Maliki as saying.

“Should the blockade continue, we know what (targets) would cause great pain and how to reach them,” he said in a speech broadcast on Al-Masira.

The blockade prompted the Huthi rebels this November to warn that they considered as legitimate targets “airports, ports, border crossings and areas of any importance” in Saudi Arabia, as well as its ally the United Arab Emirates.

The coalition, which accuses the rebels of being a proxy for regional nemesis Iran, justified the blockade by saying that it is meant to stop the flow of arms to the rebels from Tehran.

Earlier November, Saudi Arabia’s powerful Crown Prince Mohammed bin Salman said that arming Yemen’s Huthis could be considered an “act of war”, which consequently led to a heated war of words with Tehran.

Iran denied it is supplying the Huthis with arms.

The conflict has claimed more than 8,600 lives since the Saudi-led coalition joined the government’s war against the rebel alliance.

More than 2,000 people have also died of cholera this year.

British Prime Minister Theresa May on Wednesday implored Saudi leaders to ease a blockade on Yemen to “avert a humanitarian catastrophe”, her office said, echoing urgent appeals from the United Nations.

May met both Saudi King Salman and Prince Mohammed bin Salman in Riyadh during a Middle East tour, with the worsening crisis in Yemen topping her agenda.

The UN on Monday urged the Saudi-led coalition to do “much more” to ease the blockade impeding shipments of aid and fully reopen the key rebel-held Red Sea port of Hodeida.

The coalition has allowed some supplies to reach rebel-held Sanaa and the Saleef Red Sea port, also in the Huthis’ hands.

But little aid has entered through Hodeida, the main conduit for UN-supervised deliveries of food and medicine.

UN officials said Yemen could face the world’s largest famine in decades unless the blockade is lifted.            /kga