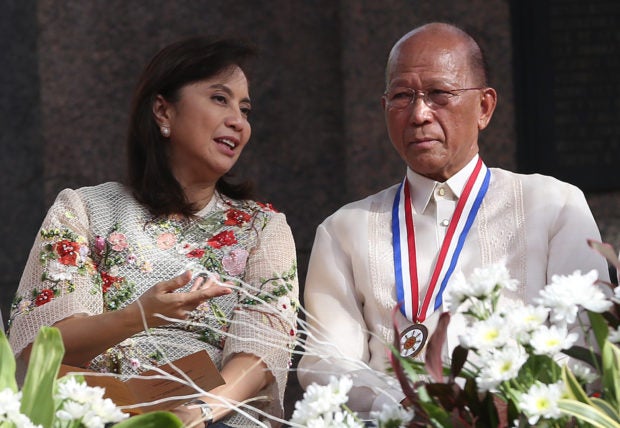 UNCONSTITUTIONAL Vice President Leni Robredo, who attended the commemoration rites at the Bonifacio Monument with Defense Secretary Delfin Lorenzana on Thursday, says President Duterte’s order to shoot and kill armed rebels is not in accordance with the Constitution. —NIÑO JESUS ORBETA

President Duterte’s shoot-to-kill order, even if aimed at suspected armed rebels, is not in accordance with the Constitution, Vice President Leni Robredo said on Thursday.

“If we say we can kill just because we are accusing someone of a crime, what will happen to all of us, right?” Robredo said when asked by reporters in Caloocan City about Mr. Duterte’s order.

The President on Wednesday said soldiers should shoot armed members of the New People’s Army (NPA) right away and disregard human rights.

“Shoot them! They will kill you anyway. If there is an armed NPA there or terrorist holding any firearms, shoot … I’ll answer for you,” he said in a speech at Sual town in Pangasinan province.

The NPA is the armed wing of the Communist Party of the Philippines (CPP), which has been waging a rebellion  for nearly 50 years.

Mr. Duterte, a lawyer, said he would answer for the soldiers accused of human rights violations.

He also said he would take up the cudgels for soldiers and police officers if they killed someone mistaken for an NPA member.

The President noted that a “mistaken identity” was “an exempting circumstance.”

His shoot-to-kill order came a day after government forces killed 15 suspected NPA members, including five women, in  separate encounters in Nasugbu, Batangas. The fatalities were in a jeepney and a van.

Mr. Duterte terminated peace negotiations with the National Democratic Front of the Philippines (NDFP), the political arm of the CPP, last week through Proclamation No. 360. He cited the rebels’ “insincerity” in the talks, saying that they continued to attack and kill soldiers and  civilians.

A day after signing the proclamation, the President told soldiers to be prepared for “virulent confrontations” with the rebels.

Robredo, who is also a lawyer, said the President’s shoot-to-kill order did not seem to be stated in the Constitution and the laws.

“What our laws say is, if someone erred, there is a process to know if the charges are true and there are appropriate penalties for the charges,” the Vice President told reporters in an interview, a transcript of which was e-mailed by her office.

She said the rule of law would be eroded if people were allowed to take the law into their own hands. “[T]hat would lead us to a lot of mess.”

Robredo was attending the Bonifacio Day celebration in Caloocan City, where Defense Secretary Delfin Lorenzana represented the President who skipped the event to tend to the Mindanao conflict.

Malacañang defended the President’s order for soldiers to shoot and kill armed members of the NPA.

Presidential spokesperson Harry Roque said on Thursday that communists who took up arms against the government were legitimate military targets since they were committing a crime.

A legal consultant to the NDFP said Mr. Duterte’s shoot-to-kill order was a violation of the Comprehensive Agreement on Respect for Human Rights and International Humanitarian Law (Carhrihl), which was signed by both the government and the NDFP in 1998.

“There are rules of war aka international humanitarian law. One who is not in a position to fight or doing an overt hostile act should not be killed summarily,” said lawyer Edre Olalia, an NDFP consultant.

Carhrihl is a 2-decade-old agreement between the Philippine government and the NDFP, signed in The Hague, that ensures that despite the armed conflict, human rights are upheld by both sides and abuses would not go unpunished.

The military spokesperson, Maj. Gen. Restituto Padilla Jr., assured the public that the Armed Forces of the Philippines would continue its “strict implementation” of its rules of engagement, pointing out that the communist rebels have committed more human rights violations.

Padilla said the military was implementing focused operations “against the NPAs and their economic sabotage activities.”

CPP founding chair Jose Maria Sison said human rights groups should investigate the gun battle in Batangas to determine if there was an actual firefight.

Also on Tuesday, two members of a human rights group were killed and another was wounded while on a fact-finding mission in Negros Oriental.