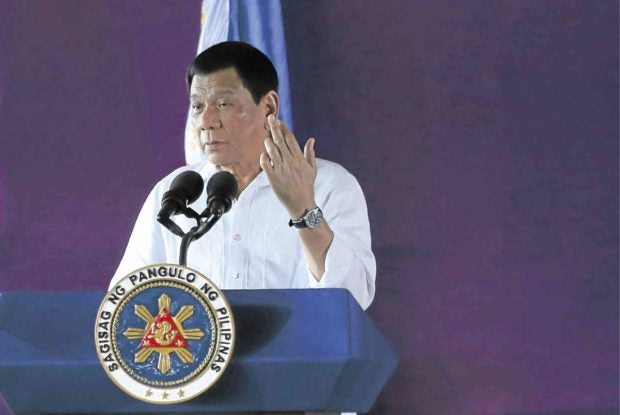 President Duterte wants no mercy for terrorists at sea, saying that the military should sink their vessels and let the fish take care of them.

Speaking at the send-off for Vietnamese fishermen in Sual town in Pangasinan province on Wednesday, the President said Southeast Asian countries had committed that they would treat poor fishermen, who had wandered into their waters, with understanding and love.

But terrorists are a different matter, Mr. Duterte said.

He noted that there had been an agreement for different countries to hold joint maritime patrols to protect their security.

“I said, if it is confirmed terrorist vessel, sink it. Sink it. Never mind about the terrorists, the fish will consume them. Sink it and end the problem,” he said.

These terrorists, he said, abduct people to make them slaves and their beheading captured on video.

The Philippines, Indonesia and Malaysia earlier launched joint naval patrols in the Sulu Sea as part of efforts to thwart the movement of Islamic State (IS)-allied terrorists.

This was at the height of the extremists’ siege of Marawi City in Lanao del Sur province, which began on May 23 and lasted for five months. They took control of Marawi with the intention of putting up an IS province, or “wilayah,” in the city.

The fighting reduced most of the city to rubble and displaced more than 200,000 residents.