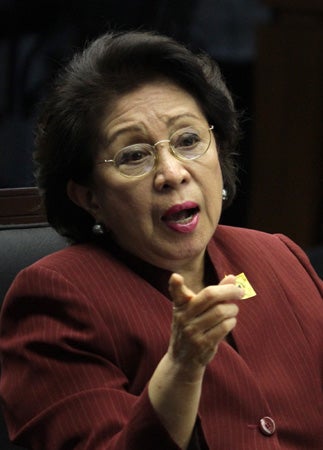 The Office of the Ombudsman has finally agreed to drop the P3.686-million pork barrel scam charges against the late Maguindanao 2nd Dist. Rep. Simeon Datumanong, conceding that he really did die nine months ago.

Although Datumanong died of cardiac arrest on Feb. 28, Ombudsman Conchita Carpio Morales on July 13 signed the charge sheets that retained his name and were filed in the Sandiganbayan on Oct. 20.

In a three-page manifestation on Wednesday, prosecutors said they would “not object to the dismissal” of the two graft charges as requested by Datumanong’s lawyer Lyndon Escala.

This was after prosecutors complied with the court’s Third Division on Nov. 10 to verify within 20 days “such alleged fact of death.”

“Upon verification with the Philippine Statistics Authority, the prosecution confirms the fact of death of accused Datumanong, who appeared to have died on 28 February 2017…,” read the manifestation.

Under Article 89 of the Revised Penal Code, the death of an accused before a final judgment totally extinguishes his criminal liability.

Despite this, the Ombudsman objected to Escala’s plea for the late lawmaker’s name to be “stricken off” the charge sheet.

Prosecutors said Datumanong’s name “should remain in the Informations in view of the allegation of conspiracy between him and his coaccused.”

The case involved Datumanong’s alleged endorsement of MLFI to implement the projects funded by his Priority Development Assistance Fund. The NCMF officials were accused of “unquestioningly” processing the payments without carefully examining and verifying the NGO-selection process and looking into the supporting documents submitted by MLFI.

As early as Aug. 7, the Ombudsman defended the practice of filing criminal charges against public officials who were publicly known to be dead already, after prosecutors filed a graft case against Mountain Province Rep. Maximo Dalog who died in June.

“The Office of the Ombudsman today said it is not expected to know or take notice of the death of an accused without a proper manifestation from his counsel,” it said in a statement justifying the filing of charges against deceased officials.