Europe’s Muslims to rise strongly, even if migration ends — study 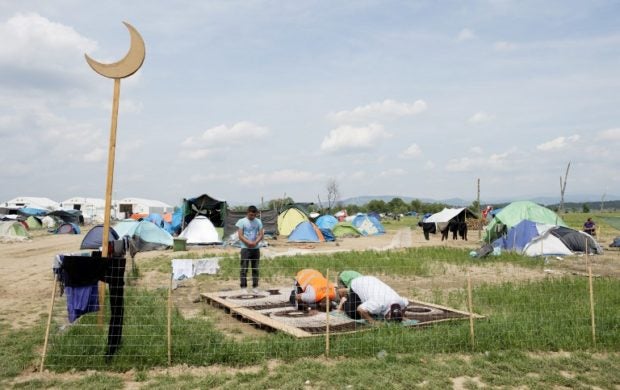 Muslims pray at a makeshift camp for migrants and refugees near the village of Idomeni not far from the Greek-Macedonian border on May 1, 2016. AFP

PARIS, France — Muslims could make up over 11 percent of Europe’s population in the coming decades, compared with just under 5 percent currently, if legal migration levels are maintained, a report by a US-based think tank said Thursday.

It showed that even if all migration into Europe stopped immediately, the Muslim population of the 28-member European Union plus Norway and Switzerland would rise to 7.4 percent from 4.9 percent in 2016.

Europe received more than one million migrants and refugees in 2015, according to figures from the UN’s refugee agency.

Most arrived from Muslim-majority nations and some rightwing political parties have upped their anti-Muslim rhetoric in their wake.

Pew, which based its projections on government data and other studies, explained the rise by saying that fertility rates were higher among Muslims, who are on average 13 years younger than non-Muslims.

The “medium” scenario was based on a return to the levels of migration seen before the refugee influx of 2015/2016.

Under that scenario the proportion of people who self-identify as Muslim was projected to more than double to 11.2 percent of the population in 2050.

The third model was based on refugees, most of them Muslim, continuing to arrive in the record numbers seen in 2015 and 2016.

Under that scenario Muslims would account for 14 percent of Europe’s population in 2050, which Pew said was “still considerably smaller than the populations of both Christians and people with no religion”.

The authors of the report also noted that refugee flows had already begun to decline in line with EU efforts to curb arrivals, suggesting the third outcome was unlikely.

If arrivals halted altogether, France — which was home to an estimated 5.7 million Muslims (8.8 percent) in 2016 according to the report — would continue to have Europe’s largest Muslim community.

Under the “medium” scenario, Britain — the top destination for non-refugee Muslims migration — would pass out France while under the “high” scenario the mantle would pass to Germany, which has received over 1.5 million refugees in the past two years.

The report also highlighted the role of migration in stemming population decline in Europe.

In the absence of further migrants the population was projected to shrink from 521 million in 2016 to 482 million in 2050.

Under the “medium” scenario, it would rise to 517 million people, while in the “high” migration scenario would take it to 539 million. /cbb