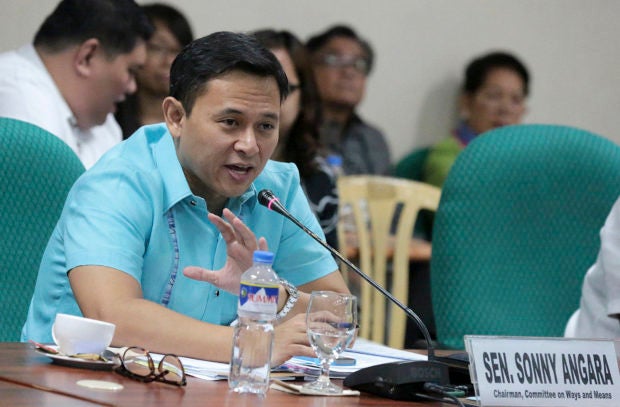 About 6.8 million of the country’s 7.5 million individual income taxpayers would be exempt from paying income taxes starting January, but most Filipinos would pay more for fuel, sweetened beverages and electricity under a tax bill the Senate approved on third and final reading on Tuesday night.

The Senate voted 17-1 to approve the Tax Reform Acceleration and Inclusion (TRAIN) bill, with Sen. Risa Hontiveros being the lone dissenter.

Sen. Sonny Angara, chair of the ways and means committee, said the measure was expected to generate P100 billion to P130 billion in revenue for the government.

Senate President Pro Tempore Ralph Recto said the tax bill would benefit 5 million people from the reduction in personal income tax, but “95 million will get hit with consumer taxes.”

“Minimum wage earners today are exempt (from paying income taxes) so they have no reduction (in income tax payment), but they will have to pay higher oil prices, higher electricity, higher sweetened beverage so on and so forth,” Recto told reporters.

Most affected would be the poor, socioeconomic Classes D and E, because of the consumption taxes, according to Recto.

Senate Minority Leader Franklin Drilon said the bill would face a “tough battle” when the bicameral conference committee reconciles the House and Senate versions next week.

Drilon expressed concern over the burden that the tax bill would impose on the people.

Highlights of the Senate version of the TRAIN bill:

All workers, including self-employed, earning P250,000 a year would be exempt from paying income taxes starting Jan. 1.

Those with annual income of between P2 million and P8 million would pay P490,000 plus 32 percent of the excess of P2 million.

Those with an annual income of more than P8 million would pay P2.41 million plus 35 percent of the excess of P8 million.

The Senate retained the P82,000 tax exemption for 13th month pay and other bonuses.

A media briefer prepared by Angara’s office said 6.8 million, or 90 percent of the 7.5 million individual taxpayers, would be exempt from paying income taxes—more than triple the current number of minimum wage earners enjoying tax exemption.

“For instance, a government teacher I, with a monthly income of P20,179, now pays P28,717 in taxes annually at a rate of 25 percent. Under the proposed new tax scheme, he or she will be already exempt and will no longer have to pay taxes. The teacher will be able to take home a bigger pay and save P2,393 monthly,” the media briefer said.

Computation made by Drilon showed that the excise tax on diesel would be P3.75 a liter in 2019 and P6 in 2020, which he said could “burden the poor even more.”

Compared with the House version, the Senate bill proposed lower taxes for sugar-sweetened beverages except for those using high-fructose corn syrup.

Excluded from the tax were all milk, including infant formula and plain milk and powdered; coffee (ground and 3-in-1) and 100-percent natural fruit and vegetable juices, unsweetened tea, meal replacement and medically indicated beverages as well as those that use coco sugar and stevia.

The Senate version exempted small businesses with total annual sales of P3 million and below from paying the 12-percent value-added tax (VAT).

Also VAT-free were the sale of prescription drugs and medicines, as well as leases on housing units below P15,000 a month and socialized housing (priced P450,000 and below).

The Senate provided for a two-tier tax scheme for the automobile excise tax.

The Senate increased the coal excise tax from P10 a metric to P100 a metric ton in the first year of implementation; P200 in the second year; and P300 in the third and succeeding years.

Sen. Panfilo Lacson did not take part in the voting. Absent during the voting were Senators Francis Pangilinan, Bam Aquino and Antonio Trillanes IV.