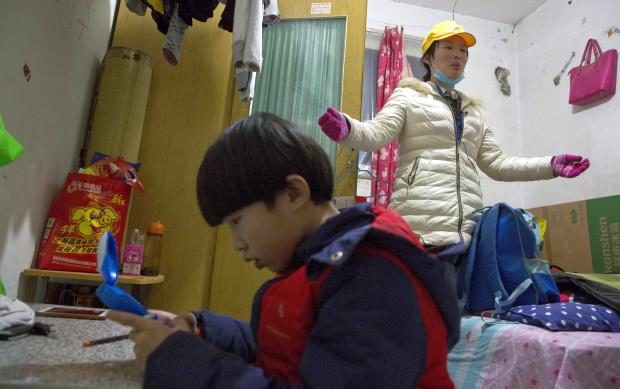 Zhou Xinci (right), a migrant from Heilongjiang, talks about her fears of being evicted, as her son sits (left), in the outskirts of Beijing, China, Monday, Nov. 27, 2017. Authorities in Beijing have been evicting domestic migrant workers from the capital in droves, triggering a public outcry over the harsh treatment of people the city depends on to build their skyscrapers, care for their children and take on other lowly-paid work. (Photo by NG HAN GUAN / AP)

BEIJING — Zhou Xinci left her hometown in China’s struggling rust belt four years ago for Beijing with little more than the clothes on her back and a dream to one day save enough money to buy a home.

That dream is now fast unraveling as Zhou, 35, watches as her neighbors – other low-income Chinese migrants like her – are being hurriedly evicted from their homes on the outskirts of the capital by the government.

Authorities in Beijing have launched sweeping evictions of workers who have migrated from elsewhere in the country, triggering a public outcry over the treatment of people the city depends on to build skyscrapers, care for children and take on other lowly paid work.

Zhou, whose husband is a factory worker in Beijing, knows their family will soon be next and wonders how they will stay in the city and keep their 9-year-old son safe and in school.

“They are chasing people away from apartments and smashing things. How wouldn’t a child be scared? My son is scared and can’t sleep at night, of course I’m scared too,” she said.

Her family now pays 400 yuan ($60) a month to rent a single room big enough for their bed, a wardrobe, television set and refrigerator. But with soaring rents and rising discrimination against migrant workers, she says it will be impossible to find another room.

“They say Beijing people will feel heartache if they lose a dog,” Zhou said. “We are living people. How could they treat us like this?”

Workers interviewed by the AP say whole families have been evicted, often with little notice, leaving them scrambling to transport their belongings in the freezing weather. Many have had to pile their furniture, bags, bedding, clothes and other items into overloaded pickup trucks and vans, discarding kitchenware and other belongings that wouldn’t fit.

“They called us at 5 a.m. and by 8 a.m. they had arrived with demolition equipment,” said Bi Yan’ao, a 54-year-old migrant worker who has lived in Beijing for 13 years, describing what it was like to have to move out of his apartment in Daxing in just a few hours last week, clutching his belongings. “In just one hour, they flattened a 100-meter (330-foot) -long stretch of land. How scary is that.”

After that, Bi went to work with his relative at a shop selling cosmetics, but then they were told this week they had a couple of days to move out. On Monday evening, Bi stood in the store surveying the piles of boxes of merchandise around him, at a loss for what to do. He teared up.

The eviction drive has been met with widespread anger and criticism online, with people saying it has laid bare the stark inequality in China that prevents poorer migrants who provide essential services in cities from enjoying the same status as the cities’ residents.

Under China’s much-criticized household registration, or “hukou,” system, Chinese migrant workers who can’t obtain “hukou” in the cities they work in are often denied access to subsidized health care, education and social services.

Most tenants living in such homes on the outskirts of the city are factory workers, construction laborers, delivery people, drivers, cleaners, or hairdressers who come from poorer parts of China. Others run their own small wholesale businesses and shops selling cheap goods. Some have lived for years in the city with their children.

Along the same street that Bi was on, the owner of a luggage store described a similar experience, saying officials came and told her family to leave within days before the area was to be sealed off and demolished.

“People have feelings, we cannot accept this, to be asked to leave suddenly,” said the store owner, who gave only her surname, Yang. “We’ve lived in Beijing for a long time and it’s not about how much contribution we’ve made. In the end, we’ve ended up with not even a place to live, I feel sad. So deeply sad.”

A group of intellectuals signing an open letter to the central government urging the city to stop the evictions and provide temporary housing for the migrants.

One of the signatories, independent political commentator Zhang Lifan, said anger over the evictions showed that rapid economic growth has resulted in a massive accumulation of wealth and also rising inequality and a sense of unfairness.

Zhang said many Chinese were quick to extend a hand to displaced migrants because they too had once been in their shoes, having worked their way up the socio-economic ladder to secure a decent middle-class life.

“When they saw that the migrants had been evicted, they realized that similar tragedies could have happened to them,” Zhang said.

In the wake of the evictions, individuals and organizations have offered to help displaced migrants with free accommodation.

Wang Qi, an employee of a real-estate company in Langfang, a nearby city in Hebei province, said it would provide apartments as temporary homes for the migrant workers free of charge for up to three months. A posting online describing the offer said priority would be given to the sick, elderly and pregnant.

“Our boss himself was once a migrant worker in Beijing,” Wang said. “But now that he has become wealthier, he wants to help out.”

The Beijing Work Safety Administration has denied that the campaign is aimed at driving out low-income migrants, saying it covers unsafe housing across the city.

The Nov. 18 fire in Daxing district that killed 19 people, including eight children, was a “very painful” lesson for the government, and the cleanup campaign was aimed at not allowing such a tragedy to be repeated, a statement on the administration’s website said.

It acknowledged that the evictions have caused “temporary difficulties” to people who have had to leave at short notice and it pledged to fix such problems.

The Beijing city government said last year it plans to cap the city’s population at 23 million by 2020 and cut by 15 percent the number of people in six main districts.

“Beijing needs migrant workers to do all the low-cost efficient service jobs that middle-class Beijingers depend upon,” said Crothall. “But if you push them out of the city altogether, then there is going to be no one to do those jobs.”