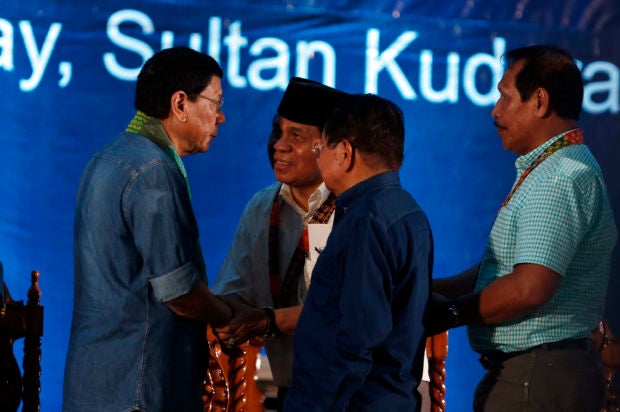 BANGSAMORO ASSEMBLY President Duterte meets with Ibrahim Murad and other leaders of the Moro Islamic Liberation Front during the Bangsamoro Assembly at Sultan Kudarat town in Maguindanao province. —JEOFFREY MAITEM

President Duterte on Monday said he would call a special session of Congress to tackle the proposed Bangsamoro Basic Law (BBL).

Speaking at the culmination of the Bangsamoro Assembly at Sultan Kudarat, Maguindanao province, Mr. Duterte said Congress, scheduled to go on recess on Dec. 15, could hold a special session for one or two days to hear BBL proponents.

“I will work very hard for it. I will ask Congress to [hold] a special session just to hear you talk about this issue. I said this is sacred. This is important and valuable. It would involve eventually, if the people wish it, a new structure for the entire country,” Mr. Duterte said.

“If not, then let us work out a way as long as we make sure that we can give our brothers and sisters, especially the Moros, an arrangement that is acceptable to them. I know you are realists,” he added.

Moro rebels have been waging an insurgency since the 1970s seeking autonomy or independence in areas of Mindanao that they consider their homeland.

The immediate objective of Monday’s assembly was to build support for the proposed law.

If the proposed BBL is passed into law, the Bangsamoro Transition Authority (BTA) would be constituted in 2019 in preparation for the first election of the officials of the new autonomous region in 2022, BTC Chair Ghadzali Jaafar said earlier.

The new parliament under the BTA will be composed of 80 members, who will all be appointed by the President.

Monday’s gathering was held after three postponements due to Mr. Duterte’s unavailability.

“Me, I support you. That is my promise. Do not ever, ever question me,” Mr. Duterte said.

“Delay? Of course, it entails delay. You know that … It takes forever to move. Somebody has to push it because there are thousands of concerns,” he said.

“But I will impress upon them (Congress), that you’ll have to devote even one day or two days to hear them out. Hear us from Mindanao,” he added.

Mr. Duterte said he wanted a BBL that was “inclusive” and dealt with the concerns of Muslims, Christians and “lumad” in Mindanao.

He said there was a need to “correct the injustice committed on the Moro and the lumad” while preserving the “unity of the republic.”

“There must be one nation for all—one republic for us Moro and Christian. That I cannot bargain away. I am doing everything to avoid a breakage,” he said.

Mr. Duterte said “just compensation” could be tackled later on through separate legislation but the proposed BBL should ensure autonomy for the Bangsamoro and the right to “enjoy all your natural resources.”

“As far as I’m concerned, actually what is at stake here is the preservation of the Filipino republic and to correct historical injustice,” he said.

Last month, Mr. Duterte urged Congress to hasten the approval of the proposed BBL, warning that the Moro partners of the government in peacemaking were getting impatient.

Cardinal Orlando Quevedo, the archbishop of Cotabato, spoke at Monday’s gathering and said the inclusivity of the proposed BBL would end tribal biases and religious prejudices in Mindanao.

“Its passage would mean peace and coexistence in Mindanao,” he said.

Gov. Mujiv Hataman of the Autonomous Region in Muslim Mindanao said he attended the assembly “not as a mere supporter” of the proposed BBL but as “a believer of its embodiment, true and lasting peace.”

Muslimin Sema, former Cotabato City mayor and chair of the MNLF, said: “Our hope is in Allah as we look back in the long armed struggle for self-determination, which dream and aspiration we find in the [proposed] BBL.”

“We hope our lawmakers may give due consideration to these several endorsements toward the [proposed] BBL’s early passage,” Iqbal said. —WITH REPORTS FROM CHARLIE C. SEÑASE, EDWIN O. FERNANDEZ, JEOFFREY MAITEM AND AFP